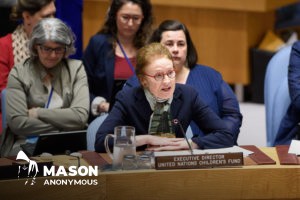 “The deadly blast that hit the Afghan capital Kabul during rush hour today did not spare children during one of their most mundane and important routines”, she said, “being at school.”

According to news reports, three people died and more than 90 were injured, when a huge car bomb was detonated by militants, who then stormed the building, leading to a gun battle that lasts seven hours.

Ms. Fore added that schools should be havens of peace, and the violence in or around schools is never acceptable. However, the head of UNICEF said that the security situation in Afghanistan, which was “already dire”, has recently deteriorated, and that the “violence, which keeps blighting futures and claiming young lives, must end.”

UNICEF, she continued, renews its call to all parties to the conflict in Afghanistan to end the violence and to protect children at all times. Generations of Afghan children, she said, have known nothing but war. “It is more than time that they enjoyed a life free of violence and conflict.”

The UN Mission in Afghanistan, UNAMA, responded with a Tweet, declaring that the UN was “appalled” by the bomb attack, and “demands an end to indiscriminate blasts in civilian areas”.

The attack comes just days after UNICEF pointed out that children in conflict zones such as Afghanistan are being denied a safe place to learn, during the promotion of the ‘Safe Schools Declaration”, a political commitment to better protect students, teachers, schools and universities during war and to allow young people to continue their education.