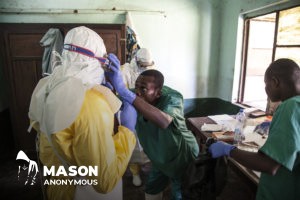 The World Health Organization (WHO) convened its Emergency Committee on the disease which concluded with a call for sustained political commitment and continued cross-border screenings, among other recommendations.

The outbreak began in August 2018 and there have been 3,114 confirmed cases and 2,123 deaths, according to latest figures.

It is occurring in an area long affected by armed group activity, making insecurity the greatest concern.

While Ebola risk remains “very high” at the national and regional levels, it is still low globally, WHO said in a statement following the meeeting.

I want to thank all the brave #Ebola responders from the government of #DRC, @WHO and all partners, who continue to put their lives on the line every single day. We owe it to them, and to the people they serve, to devote ourselves to ending this outbreak as soon as possible pic.twitter.com/y5phK4LF2g

Cases have consistently declined in recent weeks: 15 new cases were reported during the period 7 – 13 October, compared with 128 confirmed cases per week during the peak of the outbreak in April.

“When response activities are suspended, the likelihood of under-reporting and the potential for the disease to spread to new areas increases,” the agency said. “In addition, continued transmission in remote areas where access is difficult creates the possibility of transmission chains going undetected.”

An experimental vaccine known as rVSV-ZEBOV-GP is being used in the outbreak and has been shown to be effective in protecting people from the Ebola virus.  So far, more than 230,000 people have been innoculated, including more than 60,00 health and frontline workers in the DRC, Uganda, South Sudan, Rwanda and Burundi.

The meeting heard that a so-called “ring” strategy is also proving effective. This involves vaccinating all people who come into contact with a person who has Ebola.

Separately on Friday, WHO welcomed the European Medicines Agency (EMA) recommending conditional marketing authorization for the vaccine: a key step before licensing and roll-out.

“This vaccine has already saved many lives in the current Ebola outbreak, and the decision by European regulator will help it to eventually save many more,” said WHO Director-General Tedros Adhanom Ghebreyesus.