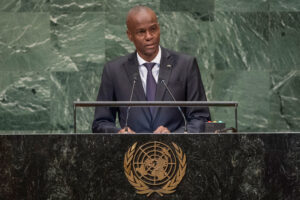 UN Secretary-General António Guterres has condemned the incident in the strongest terms, according to a statement issued by his Spokesperson, Stéphane Dujarric.

“The Secretary-General calls on all Haitians to preserve the constitutional order, remain united in the face of this abhorrent act and reject all violence”, it said.

President Moïse, 53, was shot dead in an overnight attack in his private residence in Haiti’s capital, Port-au-Prince.  His wife, Martine, was also injured and is receiving treatment, according to media reports.

The entrepreneur and politician was elected in November 2016 and began serving the following February.

Mr. Guterres has extended his deepest condolences to the people and Government of Haiti, and to the family of the late President.

The UN will continue to stand with the Government and the people of Haiti, the statement continued.

Haiti is the poorest country in the Americas, and has experienced serious political, economic and humanitarian challenges in recent years.

Six prime ministers have been appointed since the late President took office, with a seventh appointed this week who has yet to be sworn in.

Last month, the top UN official in Haiti, Helen La Lime, briefed the Security Council on the worsening socioeconomic conditions in the country, rising gang violence, resurgence of COVID-19, and the “ever-growing polarization of Haitian politics”.

She said despite several Haitian-led mediation efforts, “the deep-rooted political crisis which has gripped the country for the better part of the last four years, shows no sign of abating”, while the rhetoric used by some political leaders was growing increasingly acrimonious.

Speaking at the outset of its meeting on Wednesday, Security Council President Ambassador Nicolas de Rivière of France said members were saddened by the death of the Haitian leader.

“The members of the Council express their deep shock at the assassination of President Moïse, which occurred earlier today in Port-au-Prince, and their concern at the fate of the First Lady, Martine Moïse, who was also shot in the attack,” he said.

The 15 ambassadors also expressed their deep sympathy to the family of the late President, and to the Government and people of Haiti.