The World Drug Report 2022 also details the environmental consequences of the illicit drugs trade, the expansion of synthetic drugs to new markets, and an all-time high in cocaine production.

“Numbers for the manufacturing and seizures of many illicit drugs are hitting record highs, even as global emergencies are deepening vulnerabilities,” said UNODC chief Ghada Waly.

“At the same time, misperceptions regarding the magnitude of the problem and the associated harms, are depriving people of care and treatment and driving young people towards harmful behaviours”.

Out now! The 2022 #WorldDrugReport offers a deep dive into cannabis legalization and the impacts of drugs on the environment.

The report also takes a closer look at the data on drugs and conflict.

The report outlined that some 284 million 15 to 64-year-olds used drugs in 2020, indicating a 26 per cent increase during the course of a decade.

In Africa and Latin America, those under 35 represent most of the people being treated for drug use disorders.

In addition to increasing tax revenues, it has also caused a reported surge among people with psychiatric disorders, increased suicides and hospitalizations while generally reducing possession arrests.

In 2020, global cocaine manufacturing grew 11 per cent from the previous year to 1,982 tons and, despite the COVID-19 pandemic, seizures increased to a record 1,424 tons.

Nearly 90 per cent of cocaine seized last year was trafficked via land and/or sea, reaching regions beyond the regular markets of North America and Europe.

Methamphetamine (or meth) trafficking continued to expand geographically, with 117 countries reporting seizures between 2016 and 2020, versus 84 from 2006‒2010, with volume growing an astonishing five-fold, between 2010 and 2020.

While the global area being used for opium poppy cultivation fell globally by 16 per cent to 246,800 hectares between 2020 and 2021, increased Afghan production triggered a seven per cent jump to 7,930 tons during that period.

Most people in drug rehabilitation throughout Africa and South and Central America are primarily being treated for cannabis abuse while those in eastern and south-eastern Europe and central Asia, most often require help for the misuse of opioids.

In the United States and Canada, overdose deaths, predominantly driven by an epidemic of the non-medical use of fentanyl – which can be fatal in tiny doses, and is commonly used to ‘cut’ other drugs such as street cocaine – continue to break records.

Meanwhile, the report reveals data from the Middle East and Southeast Asia suggesting that conflict can act as magnets for synthetic drug manufacturing, which may increase if the violence is close to large consumer markets.

Conflicts may also disrupt and shift drug trafficking routes, as has happened in the Balkans and most recently in Ukraine, since Russia annexed Crimea and separatists took control of areas of the east in 2014. 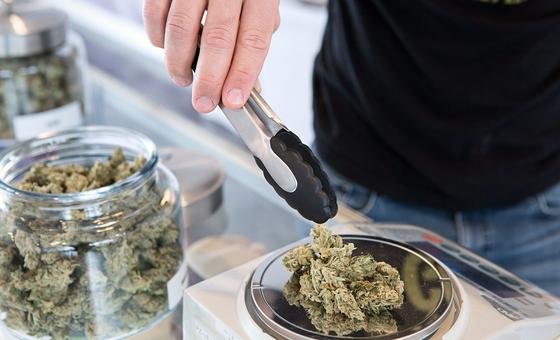 Reported clandestine laboratories in Ukraine have skyrocketed from 17 dismantled in 2019, to 79 in 2020 – 67 of which were producing amphetamines – the highest number of disassembled labs reported in any given country, in 2020.

The carbon footprint of indoor cannabis is between 16 and 100 times greater, than for outdoor cannabis, on average, according to the report – due to the intensive energy demands of artificial cultivation. And it is 30 times greater for lab-produced cocaine, than that for cocoa bean production.

Other environmental impacts include substantial deforestation associated with illicit coca cultivation; waste generated during synthetic drug manufacturing, which can be 5-30 times the volume of the end product; and dumping other waste that can affect soil, water and air directly.

Although women remain in the minority of drug users globally, their consumption rate increases more rapidly than men on average, said the report, and fewer get treatment.

And although women represent almost one in two amphetamines users, they constitute only one in five people in treatment for amphetamine use.

Moreover, they play a range of roles in the global cocaine economy, from cultivating coca to transporting small quantities and selling to consumers.

“We need to devote the necessary resources and attention to addressing every aspect of the world drug problem, including the provision of evidence-based care to all who need it, and we need to improve the knowledge base on how illicit drugs relate to other urgent challenges, such as conflicts and environmental degradation,” said UNODC chief Ghada Waly.