Mr. Grundberg has intensified his engagement towards full implementation of the truce, and is urging all parties to explore options for expanding and extending it.

UN Envoy Grundberg on truce implementation & prospects of renewal: “The Yemeni people & the international community want & expect the truce to be fully implemented, renewed & strengthened. The parties must rise to the occasion & not miss this opportunity" https://t.co/5qsGeuO5bC

Rise to the occasion

“The Yemeni people and the international community want and expect the truce to be fully implemented, renewed and strengthened,” he said.

“I hope the parties will engage constructively with my efforts and recognise the gains that an extended and expanded truce can deliver to Yemeni people. They must rise to the occasion and not miss this opportunity.”

The truce was first announced in April for two months, and was renewed in June, marking the longest period of relative calm in more than seven years of conflict, and a significant decrease in the number of civilian casualties.

However, both sides have raised concerns about alleged violations and incidents across multiple frontlines.

The Office of the Special Envoy is working through the Military Coordination Committee to facilitate dialogue and support de-escalation. “I hope the parties will continue their work under the committee and establish the joint coordination room to address incidents in a timely manner,” he added.

Mr. Grundberg also provided an update on the key issue of roads.  At the outset of negotiations, both parties put forward proposals on opening roads in Taiz and other governorates, which he described as a positive sign of their willingness to engage.

The latest UN proposal called for three roads put forward by the Houthis, officially known as Ansar Allah, and one advocated by civil society.  The Government accepted the proposal and the Houthis rejected it.  Recently, the parties have announced unilateral plans.

Mr. Grundberg stressed that unilateral actions alone are not enough to ensure civilians can safely travel along roads that cross frontlines under the control of different parties.

“I will not stop pursuing my efforts to bring the parties closer together to reach agreement to sustainably and safely open key roads in Taiz and other governorates. This will remain a priority for this truce period and any future extension of it.” 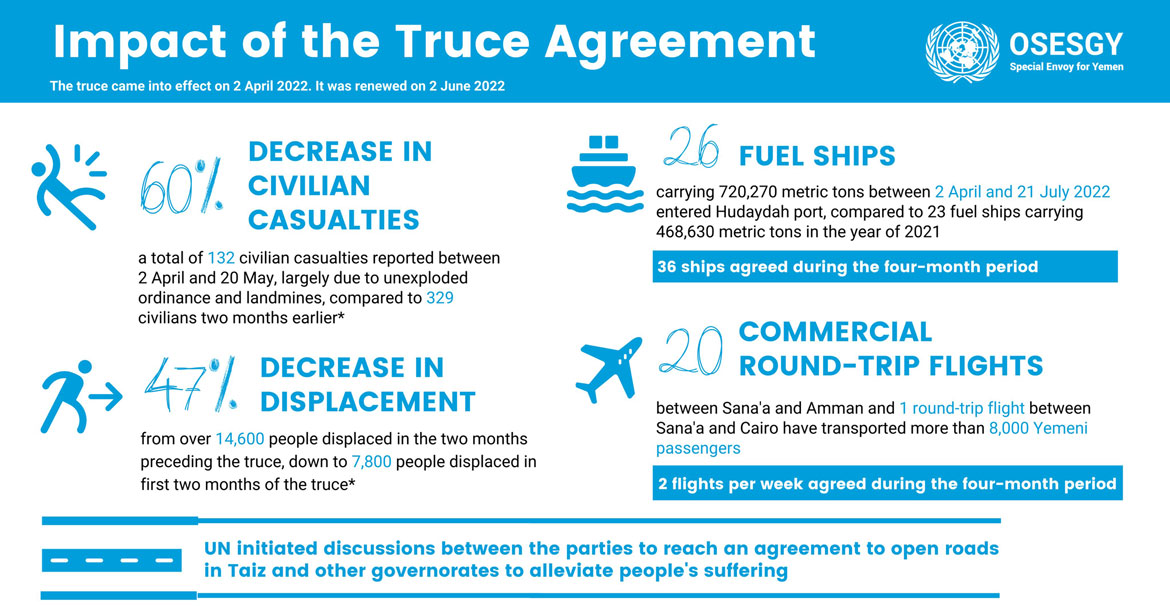 The Special Envoy highlighted achievements under the truce, such as agreement on commercial flights between the capital, Sana’a, and Amman, Jordan, and the Egyptian capital Cairo.  So far, 36 flights have taken off and his Office is exploring options to include more destinations as a possible part of an extended agreement.

The truce also stipulated that 36 fuel ships should enter the critical port of Hudaydah during the four-month period.

To date, 26 vessels have entered the port carrying more than 720,000 metric tons of fuel derivatives, with more in the pipeline, compared to 2021, which saw 23 fuel ships carrying less than 470,000 metric tons. Ensuring continued fuel supply is more important than ever now, as global fuel prices rise.

As he steps up his engagement, Mr. Grundberg underlined what has been accomplished so far.

“Moving away from seven years of war to a state of relative calm will not be without challenges, and there have been some shortcomings in fully implementing the elements of the truce,” he said. “Nevertheless, the truce has been transformational for Yemen. It has made a tangible difference to people’s lives.”

IOM/Olivia Headon
Children at a story reading session in a displacement site at Ta’iziyah, Yemen.