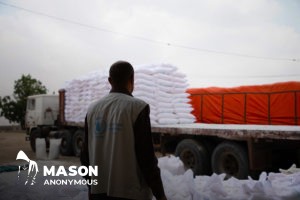 Spokesperson Hervé Verhoosel briefed journalists in Geneva that the agency took the decision after efforts failed to prevent aid being diverted from those who need it most, despite repeated warnings:

“In any conflict areas, some individuals seek to profit from preying on the vulnerable and diverting food away from where it is most needed”, he said. “WFP has been seeking the support of the Sana’a-based authorities to introduce a biometric registration system that would prevent diversion and protect the Yemeni families we serve, ensuring food reaches those who need it most. Unfortunately, we are yet to reach agreement.”

In a briefing in New York on Monday, David Beasley, the head of WFP, warned the Security Council that a suspension of aid was likely, because there was “serious evidence” that food was being misappropriated, and being taken “from the mouths of hungry little boys and little girls”, and that deals signed by Houthi leaders were being flouted on the ground.

Mr. Beasley, during his blunt address, said that no one associated with the UN should stand “idly by” as some in the Houthis forces look to obstruct and delay WFP aid efforts, in order to make a profit.
Friday’s development means that aid will be cut to the capital region, which could affect some 850,000 people; although Mr. Verhoosel insisted that WFP will maintain nutrition programmes for malnourished children, pregnant and nursing mothers.

In total, WFP estimates that around three-quarters of the people in Yemen who do not have reliable access to food, some nine million, are in areas controlled by Houthis, who have been fighting forces loyal to President Abrdabbuh Mansour Hadi for more than four years.

Back in May, WFP’s Spokesperson said that the greatest challenge the agency faced in getting aid to Houthi-held areas does not come from guns, but rather “the obstructive and uncooperative role of some of the Houthi leaders in areas under their control.” He said humanitarians working in Yemen were being denied access to the hungry, with aid convoys blocked, and local authorities interfering with who gets food.