Notwithstanding the “dire” situation, Under-Secretary-General for Peace Operations, Jean-Pierre Lacroix, assured the Council via video tele-conferencing that the UN is “fully mobilized” to continue supporting the Sudanese people.

Just told Security Council members that we’re driven by sense of urgency and collective responsibility to enable the success of the truly historic transition in Sudan. We are planning a future @UN presence in the country to help do just that. Full remarks https://t.co/eSB21dME6X pic.twitter.com/EUMI453Zqo

Noting progress on political reforms, accountability and women’s participation in decision-making, he said that “the Sudanese authorities and people have pushed ahead” with implementing their democratic transition.

Meanwhile, civil unrest, a sharp increase in attacks against farmers by pastoralists and human rights abuses, are some obstacles to the peace process.

“These challenges underline the persistence of some of the conflict drivers in Darfur, which may go beyond the scope of the peace process and will require a heavy investment in peacebuilding”, said Mr. Lacroix.

He also spoke of “worrying developments” in West Darfur at the end of the year that left some 65 people dead, over 46,000 internally displaced and an additional 11,000 who fled to Chad.

“It is also critical to make progress on the Darfur track of the peace process and for the population of Darfur to see peace dividends”, he stressed.

In response to the COVID-19 pandemic, the closure of airports, seaports and land crossings along with the suspension of all peacekeeping rotations have severely impacted the African Union-UN Hybrid Operation in Darfur (UNAMID), rendering “impractical” an effective exit by 31 October.

The peacekeeping chief maintained once decided by the Council, the follow-on presence’s structure, mandate and establishment timeline would “significantly impact the sequencing and overall timeline of UNAMID’s drawdown”.

Considering the enduring threats to civilians and a high anxiety level among the most vulnerable populations over UNAMID’s exit, the drawdown process must be “managed carefully”, he stressed and should not signal the lack of “concerns related to the protection of civilians in Darfur”.

The top peacekeeper underscored that the follow-on presence would aim to “preserve and consolidate the gains made over the years” and “build on the peacebuilding work” of UNAMID and the UN Country Team have conducted.

“Our objective is to achieve a smooth transition to a future UN mission that can help the UN better support the Sudanese people”, he said, adding that that this entails ensuring that every mandate has the Sudanese authorities’ full support.

Meanwhile, Under-Secretary-General for Political and Peacebuilding Affairs Rosemary DiCarlo informed of a “worrisome” humanitarian situation in the country.

“The number of people who need humanitarian assistance across Sudan increased from about 8 million to 9.3 million by the end of 2019”, she said, attributing this to a deepening economic crisis.

And with the risk of a wider COVID-19 spread, “the economic challenges could worsen”, she warned.

“The situation in Sudan is clearly dire and the need for support is real and urgent”, spelled out Ms. DiCarlo.

“The protection of civilians is also an area of focus”, said Ms. DiCarlo, which requires “a comprehensive approach…a to be effective in the long-term”.

While the coronavirus outbreak has prohibited a transition team on the ground, she assured the Council that planning is underway virtually and a team will be physically deployed to Sudan as soon as the situation allows.

“I trust we all share this sense of urgency and collective responsibility to enable the success of the truly historic transition in Sudan”, she concluded. 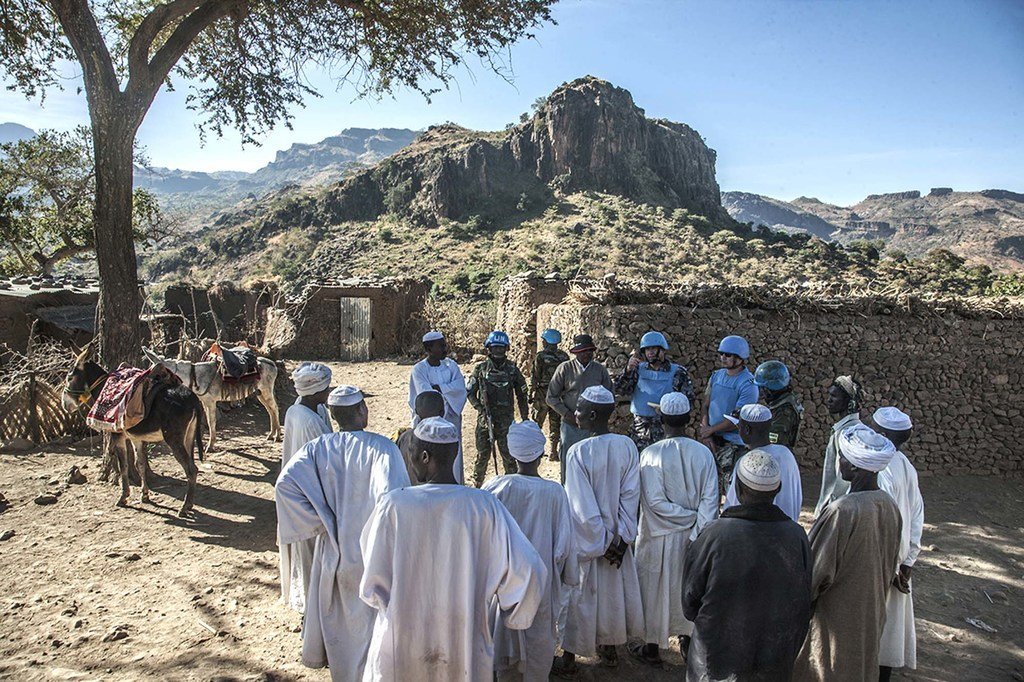 UNAMID/Mohamad Almahady
UNAMID peacekeepers interact with local community members during a routine patrol in Siri Sam village, near the Mission’s temporary base in Golo, Central Darfur.