The development in Geneva echoed the concern of the Security Council, which on Sunday called for an emergency session of the General Assembly on the crisis. 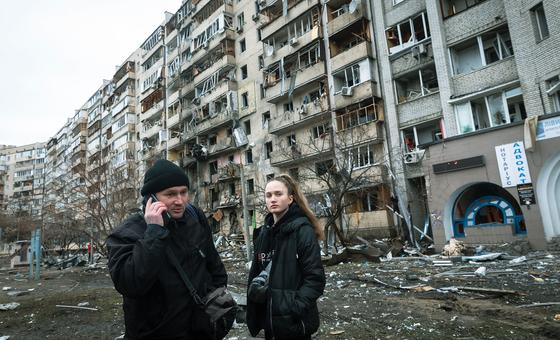 Addressing the Human Rights Council, Ukraine Ambassador to the UN in Geneva, Yevheniia Filipenko, outlined the death and suffering caused, as talks were under way at the Belorussian border between Ukraine and Russia .

The Ukraine delegation also presented a draft resolution, which it requested be considered during an urgent debate that called for an international probe into any alleged human rights violations stemming from Russia’s military action on 24 February.

“The reason for this request is known to the whole world. Russia – a Member of this Council – perpetrated an unprovoked and unjustified attack on Ukraine,” said Ms. Filipenko, describing it as also “an attack on every UN Member State in the United Nations and on the principles that this organization was created to defend.”

Opposing the request, Russian Ambassador Gennady Gatilov expressed disappointment with a number of delegations’ attempts to “once again ramp up confrontation in the Council”.

“The proposal to discuss as an urgent debate the topic that has nothing to do with the true concerns about human rights in Ukraine,” he maintained.

.@mbachelet calls for strong leadership at a moment of "profound gravity"

Opening @UN_HRC, she said "remarkable progress" made over 2 decades in every region is in jeopardy. She called for strong action to uphold intl law & human rights: https://t.co/xZpTxBvR2g #HRC49 pic.twitter.com/1sztN0ZQjn

After the intervention, Human Rights Council President Federico Villegas called on all 47 members to vote on Ukraine’s request.

The result was 29 votes in favour, five against with 13 abstentions, meaning that the Urgent Debate will take place at 3pm on Thursday.

Highlighting grave concerns over the toll on civilians from the “military attack on Ukraine”, UN High Commissioner for Human Rights Michelle Bachelet said that “countless lives” were being put at risk.

Ms. Bachelet explained that between last Thursday morning and Sunday evening, 406 civilian casualties had been confirmed – 102 of whom had been killed, “including seven children.”

Most were killed by “explosive weapons with a wide impact area, including shelling from heavy artillery and multi-launch rocket systems, and airstrikes,” she continued, noting that the true death toll is most likely considerably higher.

After speaking out against Russia’s military action, UN Secretary-General António Guterres insisted in his video address that human rights are “inescapable” as well as “powerful.”

“People everywhere know that intuitively. And autocrats, especially, know that human rights pose the greatest threat to authority. That’s why they stop at nothing to deny, dismiss and distract people’s attention, as they trample on basic rights and freedoms,” underscored the UN chief.

He also spoke out on reports highlighted by the UN human rights office, OHCHR, that more than 1,800 anti-war protesters had been arrested in Russia after the crisis erupted, along with moves to shut Russian civil rights group Memorial.

“Closing down a celebrated human rights organization, with a proud history and global links, this is not the sign of a strong State. It is the sign of a State that fears the power of human rights,” upheld the Secretary-General.

Ignazio Cassis, President of the Swiss Confederation, underscored the level of international concern, describing Russia’s efforts to legitimize its actions as “not credible.”

“No provocation happened to justify such an intervention…The military intervention of the Russian Federation runs contrary to the most fundamental principles of the United Nations Charter, which were created out of the ruins of two world wars.”