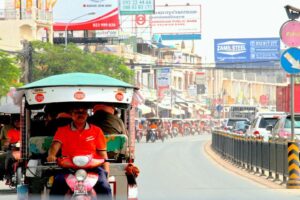 UN Special Rapporteur Vitit Muntarbhorn announced the plan on Friday at the conclusion of an 11-day mission to the country.

🇰🇭 #Cambodia: UN expert proposes 10-point human rights agenda to improve the human rights situation, address #HumanTrafficking, open up civil and political space and pave the way for democratic reform, at the end of his first visit to the country.
👉 https://t.co/aoSp8FeaAV pic.twitter.com/gm8eG9zsmb

Although Cambodia has achieved much internationally-recognised progress, and ratified most core human rights treaties, he noted that a “pervasive paradox” persists.

“Since 2017, when the main opposition party was disbanded unjustly by judicial order, the country has effectively been under single-party rule, with all seats of the National Assembly in the hands of that monopoly,” he said.

While in Cambodia, Mr. Muntarbhorn was able to visit a peaceful demonstration by workers from the NagaWorld casino, who have been protesting massive layoffs.

The rights expert travelled to the city of Sihanoukville, where he met with local government officials to learn about local cybercrime and “surreptitious syndication” linked with human trafficking and other forms of exploitation.

He also met with communities displaced or evicted by the competition for land and flooding, due in large part to “unbalanced development”, and with opposition party members and independent commentators who have faced harassment or legal proceedings.

“I am pleased to have met with and learned from all those who generously shared their time, thoughts and experiences with me with characteristic Cambodian warmth. This is a country with a bright future, but it faces a number of severe human rights challenges in the lead up to next year’s general election,” he said.

The Special Rapporteur urged the government to adopt his 10-point Action Agenda to improve human rights in the country,

It calls for opening up civic and political space by suspending and reforming draconian laws, ensuring election-related personnel are separated from political parties, and ending prosecution of political opposition and human rights defenders.

He also recommended releasing all those currently in prison, dropping charges against persons whom the authorities see as adversaries, and improving the quality of law enforcers through proper selection, incentivisation and distance from political authority.

Mr. Muntarbhorn said human trafficking victims who are duped into working for online scam companies in Cambodia were experiencing a “living hell”, often resulting in torture and even death.  He offered several measures to address the situation.

“Countries are now waking up to the phenomenon [of trafficking to the country] and Cambodia needs to activate counter-measures more strongly, while welcoming international cooperation and support,” he said.

UN Special Rapporteurs like Mr. Muntarbhorn are appointed by the UN Human Rights Council, which is based in Geneva, to report on specific country situations or thematic issues.

These independent experts operate in their individual capacity and are neither UN staff, nor are they paid for their work.