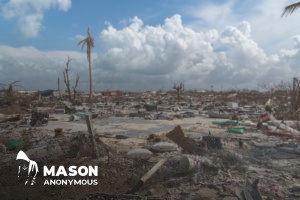 The funding will support IOM operations in areas such as camp coordination and management, provision of shelter and non-food items, and emergency evacuations through April 2020.

“Hurricane Dorian caused widespread devastation on the islands of Abaco, from Marsh Harbour to the North, and Grand Bahama; from Pelican Point east to McLean’s Town; leaving behind a trail of destroyed infrastructure, clogged with debris from devastated houses, domestic goods, vehicles and natural debris like trees and mangroves, uprooted by the storm surge,” said IOM officer, Nazif Aliu.

Hurricane Dorian hit The Bahamas on 1 September. In addition to the destruction, the Category 5 storm caused 61 deaths while more than 600 people are still missing.

IOM has established two offices in The Bahamas—one in the capital, Nassau, and the other on Abaco—with a third planned for Grand Bahama.

The organization is already supporting the country through grants from the United States and the UN Central Emergency Relief Fund, representing nearly $2 million of the appeal.

The funding has allowed IOM to begin debris removal in Abaco, in partnership with the NGO Community Organized Relief Effort (CORE).

“We are removing over 100 cubic meters of debris daily. This operation is coordinated with the government of The Bahamas, through its emergency response agency NEMA, which is leading the organized planning of debris removal”, said Mr. Aliu, who is based in Abaco.

The Bahamian authorities have also formally requested IOM to help relocate citizens stranded in the United States after their evacuation following Hurricane Dorian.