Billions of humans, animals and plants rely on a healthy ocean, but rising carbon emissions are making it more acidic, weakening its ability to sustain life underwater and on land.

Plastic waste is also choking our waters, and more than half of the world’s marine species may stand on the brink of extinction by 2100.

But it is not all bad news. According to the UN Secretary-General’s Special Envoy for the Ocean Peter Thomson, momentum for positive change is building around the world, with people, especially youth, mobilizing to do their part to reverse the decline in ocean health.

The UN Ocean Conference which will take place from 25 June to 1 July, in Lisbon, Portugal will provide a critical opportunity to mobilize partnerships and increase investment in science-driven approaches.

It will also be the time for governments, industries, and civil society to join forces and take action.

With 100 days to go until the event, UN News spoke with Mr. Thomson about the event, and the current situation of our oceans. 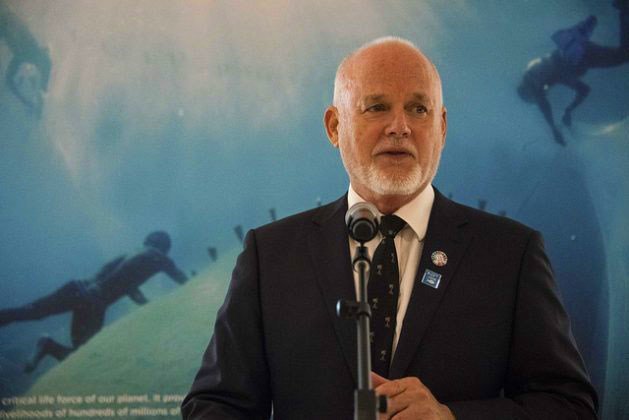 UN News:  What are UN Ocean Conferences for? What exactly happens in there?

Special Envoy Peter Thomson: When SDG 14 (to conserve and sustainably manage the resources of the ocean) was created back in 2015, along with the other 17 Sustainable Development Goals, it didn’t really have a home. It wasn’t like the health SDG, which had the World Health Organization or the agriculture one, which had The Food and Agriculture Organization (FAO), and so on.

So, the advocates for SDG 14, particularly the Small Island Developing States and some of the coastal States and other allies, said that we needed some kind of discipline to ensure that the implementation of SDG 14 was on track and, if it wasn’t, a way how to bring it on track.

So that’s how the first UN Ocean Conference came into existence in 2017, mandated by the UN General Assembly. Now we have the second UN Ocean Conference, which is, as you said, happening in Lisbon this year. So, this is the process that keeps SDG 14 honest. And that honesty, of course, is extremely important because, as the mantra goes, there is no healthy planet without a healthy ocean.

UN News: How much have we advanced in ocean conservation since the last Ocean Conference?

For the UN Biodiversity Conference in Kunming, China, this year, there is a proposal, which some 84 countries are supporting, for a “30 by 30” target.  In other words, 30 per cent of the planet protected by 2030, which of course includes parts of the ocean. So that’s a lot more ambitious than what we currently have in our SDG 14.5 Target, which is the one that sets out that 10 per cent. I believe this is achievable and we are moving in that direction.

© Unsplash/Alec Douglas
A view of Viti Levu, the largest of the islands comprising the South Pacific nation of Fiji and home of the capital city of Suva.

UN News: Climate change is a matter of survival for all of us, but especially for Small Island Developing States. As a Fijian yourself, what would you say to make people relate to the devastating situation that millions of pacific islanders are facing?

Peter Thomson: The news is not good; you’ve seen the latest IPCC report. I’m a grandfather, and what I care about, and what my friends in Fiji care about, is the security of our grandchildren.

We understand that it’s not just Small Island Developing States, it’s people living in river deltas – think of Bangladesh or the Mekong – and it’s people living in cities that are built on low alluvial foundations. Security does not look good for them, in a world that is two to three degrees warmer, which is where we’re currently heading.

So that’s why you’ll find that Small Island Developing States, Fiji amongst them, are at the forefront of the battle to transform our consumption and production patterns so that we don’t go to that much warmer world. “1.5 to stay alive”, as the saying goes. That’s still our ambition. It’s diminishing every day, but we’re calling for that ambition to be high.

It’s a matter of survival, not just for our grandchildren, but also for our cultures, that have existed for thousands of years in those locations.

UN News: What’s the way forward? What concrete actions can be taken?

Peter Thomson: Well, look at the COP26 UN climate conference. See what came out of that, and where we’re heading for the next conference, COP 27 in Sharma Sheikh this November.

It’s about cutting down the use of fossil fuels and coal burning activities. Every belch that comes out of every one of those chimneys is another nail in the coffin of those countries, of those environments I’ve just spoke about. So that’s the big call to transform.

© Alexis Rosenfeld
One of the largest coral reefs in the world off the coast of Tahiti, French Polynesia.

UN News: What do you think is hindering the progress towards ocean conservation right now?

Peter Thomson: Well, progress for me in terms of ocean protection is all about implementing SDG 14. This has quite a few targets: It’s about pollution; It’s about overfishing; It’s about the effects of greenhouse and gas emissions; It’s about getting marine tech in place, and so on.

I also think of targets like SDG 14.6: ridding the world of harmful fisheries subsidies that lead to overfishing, and lead to illegal fishing and so on. That is a very doable act, and the time to do it is at the World Trade Organization Ministerial conference in June this year.

And who’s going to do it? The member States of this world. And if they fail, they fail all of us. Now, are they going to do it? I’m sure they will, because they’ve looked at Nairobi and saw that member States there grasped that nettle of consensus and said, ‘Let’s do the right thing by people on planet. Let’s get this treaty to ban and control plastic pollution. Let’s bring it into reality’.

As a result, they’ve an intergovernmental negotiating committee to get that treaty up and running, and they will finish their work on that by the end of 2024.

I’m so excited about it, because when you talk about marine pollution, which is SDG Target 14.1, 80 per cent of that pollution is plastics. So, by getting this treaty in place, an internationally binding treaty to combat plastic pollution, we’re going to hit that target, no problem.

UN Photo/Martine Perret
Fisheries provide a vital source of food and employment for people throughout the world.

UN News: Can you give us some examples of ‘ocean solutions’?

Peter Thomson: Look, there are 1000 solutions, and a fleet of them will be launched at the UN Ocean conference in Lisbon. Rather than going into individual ones, I would say be prepared for that fleet.

But one that I particularly like talking about is nutrition. We all know that the sea provides very healthy nutrition compared with some of the other things that are produced on land.

We don’t eat what our grandparents ate. We have a totally different diet, which is, in fact, why obesity is such a problem around the world. But our grandchildren will be eating very differently from the way we eat.

They won’t be eating big fish, for example. They will still be eating fish, but there’ll be small fish which are grown in sustainable aquaculture conditions. They’ll be eating a lot more algae. And that may not sound appetizing to you, but you’re already eating it in your sushi with the nori that’s around your sushi. That’s seaweed, right? That’s algae.

The biggest source of food in the world really is unexploited by anybody other than whales, phytoplankton. We will be eating some kind of marine tofu which is made from phytoplankton. We’ll be farmers of the sea rather than hunter-gatherers, which is what we still are. It’s the only place we still are, which is out on the ocean. So those sorts of transformations are underway, but we have to invest in the transformations, and we have to start doing that now.

UN News/Laura Quiñones
Marine debris, including plastics, paper, wood, metal and other manufactured material is found on beaches worldwide and at all depths of the ocean.

UN News: And as individuals what can we do?

Peter Thomson: I think you have to think first about source to sea, which is very important. You see people throwing cigarette butts into the gutter. They don’t think about the fact that the filter of that cigarette is microplastic and it’s heading in one direction, which is down the drain into the sea eventually, and that’s more microplastics going into the ocean.

Microplastics, of course, are coming back to them when they’re eating their fish and chips because they are being absorbed into life in the ocean. That cycle is going on, whether people realize it or not.

So, I think ‘source to sea’ really important, but that relates to our industries, to agriculture, to the chemicals that are coming down the same drains and rivers out into the sea and poisoning the lagoons that we rely on for healthy marine ecosystems.

So, what can we do? We can just adopt better behaviour as human beings in terms of pollution. Look at your plastic use and say, Do I really need all this plastic in my life? I’m old enough to remember a life with no plastic, it was very nice.

You can make your own decisions about your nutrition. I remember my wife and I, when we were living here in New York, we looked at the latest report about what beef was doing to the Amazon, and we looked at a photo of our grandchildren and said, what do we love more? our hamburgers or our grandchildren? And we decided then and there – it was about five years ago – to give up beef.

Do you need to own a car? A lot of people do need to own cars, but my wife and I, we’ve been living in cities now for quite a while and we haven’t had a car for decades. You rely on public transport and walking, which, of course, is the best way to get around.

Individuals have to make the right choices that make this world a sustainable place.

UNDP Tuvalu
The low-lying archipelago, Tuvalu, in the Pacific Ocean is reclaiming land as it fights the effects of climate change.

UN News: What do you hope to accomplish in the upcoming Ocean Conference?

Peter Thomson: In Lisbon, we want to generate, outside of the formal process, the excitement of new ideas, of innovation, and that will take place in the side events.

I’m very confident that there’s going to be this innovation, which is going to be visible in that carnival type atmosphere that you develop around the central core of the conference.

The first ocean conference in 2017 was a game changer in terms of waking the world up to the Ocean’s problems. I think this conference in Lisbon in June is going to be about providing the solutions to the problems that we’ve alerted the world to. And I’m very confident that those solutions emerge when we get there.

This interview has been edited for length and clarity

United Nations News · UN Ocean Conference 2022: The launch of a ‘fleet’ of solutions