Speaking to journalists in Geneva, Spokesperson Rupert Colville, pointed out a “continuing series” of expulsions, including two large groups of Sudanese over the past month, and another group of 24 Eritreans, apparently at imminent risk of similar treatment.

According to a team on the ground, on Monday a group of 18 Sudanese individuals were expelled without due process after being transferred between two detention centres. They were apparently transported across the Sahara Desert to the Libya-Sudan border area and dumped there.

A month earlier, on 5 November, another group of 19 Sudanese were deported.

In recent months, other migrants from Sudan, Eritrea, Somalia and Chad, including children and pregnant women, have also been detained and have either already been expelled or may be at any moment. 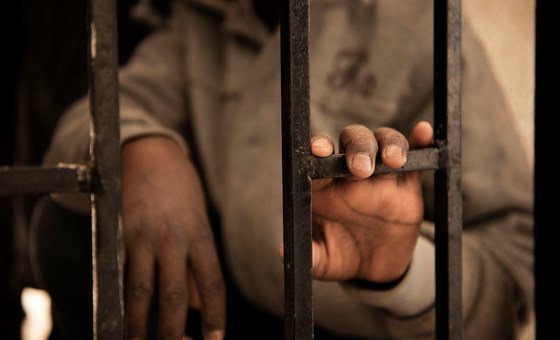 A fourteen-year-old migrant from Niger rests his hand on a gate inside a detention centre, in Libya., by © UNICEF/Alessio Romenzi

According to Mr. Colville, these actions contravene the prohibition of collective expulsions and the principle of non-refoulement, that establishes that those seeking asylum may not be returned to a country in which there are reasonable grounds to believe they will be subjected to persecution.

The Sudanese expelled on Monday, for example, were reportedly arrested, detained and arbitrarily expelled without being afforded an individual assessment of their circumstances and protection needs, such as risk of persecution, torture and ill-treatment in their home country.

“They were not granted access to legal assistance, and were not able to challenge the lawfulness of the expulsion order”, the Spokesperson said.

In addition, they were not given access to relevant UN organizations, including the UN Mission’s (UNSMIL) Human Rights Service, during their time in detention.

Of immediate concern, the Spokesperson informed, is a group of 24 Eritreans who were being held in the same Ganfouda detention centre, and who are believed also to be at risk of imminent deportation.

On 25 November, OHCHR published a  report, entitled Unsafe and Undignified: The forced expulsion of migrants from Libya, showing how asylum-seekers and other migrants in Libya are routinely at risk of arbitrary or collective expulsion.

The report documents how ejections often place migrants in extremely vulnerable situations, including long and perilous return journeys on overcrowded vehicles across remote stretches of the Sahara Desert, one of the world’s harshest environments, without adequate safety equipment, food, water and medical care.

“Those expelled have often already survived a range of other serious human rights violations and abuses in Libya at the hands of both State and non-State actors, including arbitrary detention, enforced disappearance, trafficking, sexual violence, torture and ill-treatment”, Mr. Colville said.

OHCHR is calling on the authorities to protect the rights of all migrants in Libya, regardless of their status, to investigate all claims of violations and abuse, and to bring perpetrators to justice in fair trials.

The office is also urging the international community to support the Libyan government in the areas of migration and border management, to ensure these efforts do not undermine human rights.