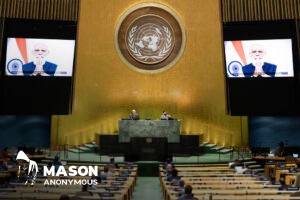 The international community must ask if the UN is still relevant 75 years after its founding, said Mr. Modi, noting that despite the Organization’s achievements, including the avoidance of a Third World War, there have since been many conflicts, and today’s challenges are vastly different from those of the past.

The Indian leader went on to question whether the Organization has been effective in tackling COVID-19, asking “where is the United Nations in this joint fight against the pandemic? Where is its effective response?”

Whilst India’s respect for the Organization is “unparalleled”, Mr. Modi noted that Indians have long waited for reform and called for the country to be included in the UN’s decision-making structures.

“How long would a country have to wait, particularly when the transformational changes happening in that country affect a large part of the world?”, he asked.

‘We treat the whole world as one family’

Mr. Modi painted a picture of India as an outward-looking country, with a commitment to multilateralism, and fundamental philosophy that is aligned with that of the UN, declaring, “we treat the whole world as one family”.

And, returning to the pandemic, the Indian leader pledged that, as the largest vaccine producing nation in the world, India would use its capacity to help all humanity in fighting the crisis.

Next year, India will be a non-permanent member of the Security Council. Mr. Modi committed to speak in support of peace, security and prosperity, adding that the country “will not hesitate to raise our voice against the enemies of humanity, human race and human values”.

India’s journey towards development will help to strengthen the path to global welfare, he continued, listing some of the country’s successes, in terms of transforming the lives of its citizens. These, he said, include bringing some 400 million people into the formal financial sector, and leading the world in digital transactions over the last four to five years.

Over the same period, added Mr. Modi, India has freed around 600 million people freed from open defecation. Other advances in the health sector include providing access to free health care facilities for some 500 million people over the last two to three years, a campaign to rid India of tuberculosis by 2025, and a programme to bring piped drinking water to 250 million households.

India’s premier announced that, in the post-pandemic era, the country will advance its vision of a self-reliant future, and that all of its programmes and initiatives are designed to benefit all of its citizens, without discrimination.

For example, women entrepreneurs and leaders are being promoted, he said, and are the main beneficiaries of the world’s largest micro-financing scheme; and the rights of transgender people are being secured through legal reforms.