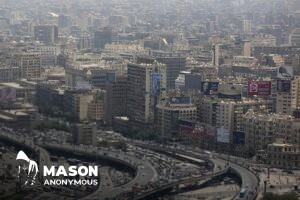 The human rights activists, from the Egyptian Initiative for Personal Rights (EIPR), were arrested “within days” of a meeting with 13 foreign ambassadors and diplomats on 3 November, according to the UN human rights office (OHCHR). They face terrorism and public security charges.

“It is absolutely abhorrent to retaliate against human rights defenders from one of Egypt’s last functioning human rights NGOs, simply for exercising their right to freedom of expression by discussing Egypt’s human rights situation,” the UN experts said in a statement on Friday.

“These arrests underline the very grave risks human rights defenders face in Egypt every day while carrying out their legitimate work … They are only the latest steps in an escalating campaign against EIPR and are part of a broader move to limit civic space and target those who operate within it,” they added.

According to the statement, authorities have targeted the human rights NGO since 2016, when the bank accounts of former EIPR director and founder Hossam Bahgat were frozen and he was banned from leaving the country. In February 2020, EIPR’s gender rights researcher, Patrick Zaki, was arrested, and remains in pre-trial detention on charges relating to terrorism and incitement.

All four men are being held in the Tora prison complex, just south of capital Cairo, with concerning reports that at least one of them is being held in solitary confinement.

The experts called for charges against all four defenders to be dropped, for them to be released immediately and unconditionally, and for authorities to cease targeting Mr. Bahgat and EIPR.

“We deeply regret that despite several calls from the United Nations human rights mechanisms and the international community, Egypt continues to use counter-terrorism legislation to target civil society,” the experts added.

In the statement, the UN rights experts also underscored that vilification of human rights defenders as a threat to society is not only harmful to the defenders, but to all members of Egyptian society.

“Human rights defenders and civil society activists must never be penalized for their efforts to ensure the protection of the rights of others … These efforts must not be regarded as terrorism or a public threat. Quite the opposite: We should protect and value them for their contributions.”

The UN rights experts making the call include the special rapporteurs on the situation of human rights defenders; on the rights of peaceful assembly and association; on human rights while countering terrorism; on torture and other cruel, inhuman or degrading treatment or punishment; on the freedom of opinion and expression; on the right to the enjoyment of the highest attainable standard of physical and mental health; and on extrajudicial, summary or arbitrary executions; as well as members of the Working Group on Enforced or Involuntary Disappearances.