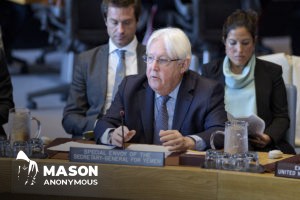 A fragile ceasefire has largely held in and around the crucial port city of Hudaydah since the signing of the historic Stockholm Agreement last December, seen as crucial first move to brokering a lasting peace between rebel Houthis, and the Saudi-led coalition backing the Government.

The members of the @UN Security Council reiterated their call on the parties to continue broader implementation of the Stockholm Agreement. Read the full statement on #Yemen here: https://t.co/y16Q8dWxav pic.twitter.com/hQZYmZvRaC

Earlier on Monday, the UN Political and Peacebuilding Affairs chief, Rosemary DiCarlo, met Yemeni President Abdrabuh Mansour Hadi in the Saudi capital, Riyadh, during which they discussed the work of the Yemen envoy, and “the way forward” for advancing the Stockholm accord, “and for returning to dialogue to reach a political solution to the wider conflict”.

Discussions were described as “productive” in a statement to reporters, and Ms. DiCarlo thanked President Hadi “for his Government’s commitment” to full implementation.

In the Security Council Press Statement, members gave their unequivocal backing to Mr. Griffiths, “and called on the parties to engage constructively and continuously with the Special Envoy.  The members commended the efforts of the Special Envoy to support the parties to implement the Stockholm Agreement and to promote a political solution in Yemen.”

More than four years of fighting for control of Yemen between the coalition and Houthi forces has fuelled a political, humanitarian and health crisis, with more than 20 million classified as food insecure, and a serious resurgence of cholera this year leading to more than 364,000 new cases.

“The members of the Security Council noted positively the initial progress achieved by the parties towards phase one of the redeployment of forces” in Hudaydah in the middle of last month, said the statement. “They urged the parties to take the necessary next steps, in accordance with the agreed concept of operations (CONOPS), for the full implementation of the Hodeidah Agreement.

They called for “full adherence to the ceasefire” in Hudaydah Governorate, “as well as the finalisation of arrangements for the Prisoner Exchange Agreement and the statement of understanding on Taiz.”

UN Mission must be deployed ‘as swiftly as possible’

They underlined the need for the UN Mission in support of the Hodeidah Agreement (UNMHA) “to be fully deployed as swiftly as possible and reiterated their call on the parties…to ensure the unhindered and expeditious movement into and within Yemen of UNMHA personnel and equipment. Noting that a substantial number of entry permits were waiting to be issued for access to Houthi-controlled areas, they called on the parties to give all necessary support and assistance to UNMHA.”

They also condemned the attacks on oil pumping facilities in the Saudi cities of Al Dawadmi and Afif in Riyadh Province, on14 May, “for which the Houthis claimed responsibility. They underlined that such attacks posed a serious national security threat to the Kingdom of Saudi Arabia, as well as a wider threat to regional security, and also threaten to undermine the UN-led political process.”

“The members of the Security Council reaffirmed its strong commitment to the unity, sovereignty, independence and territorial integrity of Yemen”, the statement concluded.