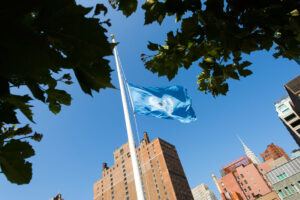 In a message commemorating the International Day of Solidarity with Detained and Missing Staff Members, Secretary-General António Guterres highlighted the “extreme dangers” encountered by UN staff and personnel globally.

From intimidation to ambushes and kidnapping, many of our @UN colleagues face extreme danger as they carry out their vital work.

We must do everything we can to ensure that those who undertake lifesaving work have the protection they need to fulfil their vital mission.

“The threats vary – from deliberate and deadly ambushes to kidnappings, intimidation and unlawful detention. But the thread is the same: these are unacceptable obstacles to fulfilling our mandates and advancing peace, sustainable development, human rights and humanitarian assistance around the globe. National staff are often at particular risk”, he said.

According to UN data, as of 15 March, 20 United Nations personnel are in detention, including six who were arrested this year, five in 2020, and the rest before that. Peacekeeping operations are a particular target, with at least 10 personnel having lost their lives this year to malicious attacks.

The International Day is held on the anniversary of the abduction of Alec Collett, who was taken by armed gunmen in 1985 while working for the UN Relief and Works Agency for Palestine Refugees in the Near East (UNRWA). His body was finally found in Lebanon’s Bekaa Valley in 2009.

The Day also honours his memory, and that of all those who have suffered a similar fate.

‘We must do everything we can’

In his message, Mr. Guterres urged all countries to support the 1994 Convention on the Safety of UN and Associated Personnel as well as its 2005 Optional Protocol, which extends protection to UN personnel delivering humanitarian, political or development assistance.

To date, only 95 countries are party to the Convention, and only 33 to the Protocol.

He reiterated that the Organization “will continue its efforts to protect our personnel, and to pursue justice for the perpetrators of attacks” and thanked the Standing Committee on the Security and Independence of the International Civil Service of the UN Staff Union for its advocacy and vigilance.

“Together, we must do everything we can to ensure that those who undertake lifesaving work around the world have the protection and conditions they need to fulfil their vital mission”, the Secretary-General said.