Simona Marinescu, UN Resident Coordinator in the Pacific island nation, reported that the situation remains critical, as the Government commenced a two-day shutdown on Thursday to ensure that all people who have not been vaccinated are protected against the highly contagious disease.

The UN Children’s Fund (UNICEF) has supplied more than 200,000 vaccines for the campaign, while the World Health Organization (WHO) has brought in emergency medical staff from across the globe.

“WHO has had to spread throughout the country, and today we’re in the field with the 128 medical teams deployed assisting them to again run the vaccination”, Ms. Marinescu told UN News in an interview.

The UN has also backed another national campaign, with workers going door-to-door to promote awareness about the importance of getting inoculations.

It is vital in rebuilding community confidence and trust following the deaths last year of two babies during routine vaccination, amid strong anti-vaccination sentiment.

In its latest data on measles infection rates worldwide, the WHO warned that some countries such as Samoa, had dangerously low vaccination levels, which had led to large outbreaks, spurred on by social media “misinformation campaigns”. Before the epidemic began, only 31 per cent of Samoans had immunity.

UN teams in the field across Samoa are using an app that allows real-time monitoring of vaccinations, storing details such as the person’s name, age, gender and geographic location. 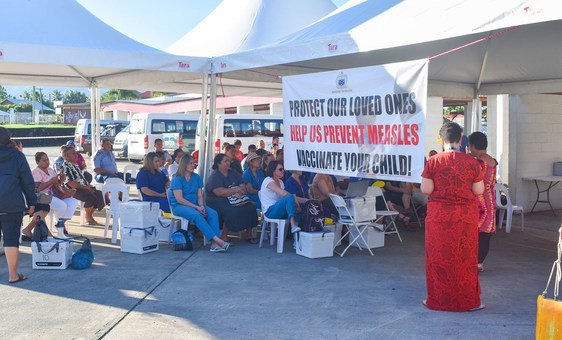 It was developed by local tech companies, and the information gathered will be used in the development of a vaccination management system for the country.

The UN’s Central Emergency Response Fund (CERF) has allocated $2.7 million allocation to support response in Samoa, but also to address the increasing number of measles cases in Tonga and Fiji.

“We are supposed to use some of those resources to ensure we build an immunization management system in this country: that we have digital records of people who get vaccinations; that we are able to bring back the babies who got one shot to be receiving the second shot at the right time,” Ms. Marinescu said.

The UN Resident Coordinator foresees that recovery will be a “huge effort”, and the funding will support several initiatives to strengthen the national health system, particularly maternal and child health services.

Pregnant women who have measles, or who are at risk of delivering babies with the disease, will receive assistance, while people who have lost relatives to the epidemic will be provided psychosocial support.

“I think we have all learned a painful lesson here. We speak about a nation that literally had no vaccination for a certain number of months and that happened on the ground of the very sad story that happened last year with the two babies killed during a routine vaccination,” Ms. Marinescu stated.

“The crisis revealed horrible vulnerabilities and gaps in capacity. So, we can’t continue like that. So, we are going to prioritize moving forward the reform of the health system, and again reviving the civil society organizations to help us literally leave no one behind when it comes to access to health care.”