The unfolding situation has caused significant disruption and threatens Afghanistan’s critical winter wheat season, which is about to begin, the UN Food and Agriculture Organization (FAO) warned, ahead of a major fundraising conference which is slated to take place in Geneva on 13 September. 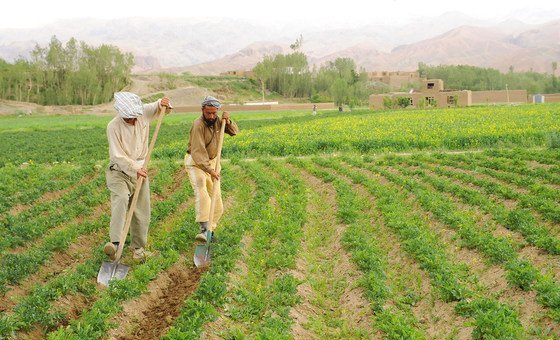 Farmers cultivate potatoes in Bamyan, Afghanistan. Without urgent support, farmers and pastoralists could lose their livelihoods and be forced to leave rural areas, by ADB/Jawad Jalali

“One in three Afghans are acutely food insecure, a situation that is dramatic by any stretch of the imagination,” said FAO Director of the Office of Emergencies and Resilience, Rein Paulsen, speaking from Islamabad.

Emphasizing the dire situation in the country, spokesperson for the UN Office for the Coordination of Humanitarian Affairs (OCHA), Jens Laerke, warned that “basic services in Afghanistan are collapsing and food and other lifesaving aid is about to run out”.

Mr. Paulsen noted that there will likely be a “25 per cent deficit on the national wheat crop this year”. Half of the average Afghan’s daily calorific intake comes from wheat, and most of the supply grown in the country is sourced to the upcoming rainfed winter season, the FAO expert said, adding that there was “an urgent imperative towards the end of September”.

“We need to make sure that that planting is starting. There’s a very short window of time to be able to address that. The seeds can’t wait. The farmers can’t wait. We need to do everything we can to ensure that those vulnerable households are supported”.

In addition to food insecurity, Mr. Paulsen noted that 70 per cent of all Afghans live in rural areas, and agriculture provides livelihoods benefits to 80 per cent of the population.

Threats to rural livelihoods have been a growing concern for FAO for months, he said. Without urgent support, farmers and pastoralists could lose their livelihoods and be forced to leave rural areas, adding pressure to supplies in towns and cities as they become internally displaced.

As of August 2021, FAO has provided livelihood and cash assistance across 26 out of 34 provinces, to more than 1.5 million people.

In August alone, FAO managed to reach over 100,000 people, despite the upheavals resulting from the Taliban takeover.

OCHA is seeking $606 million to assist nearly 11 million people during the four remaining months this year, which includes two million people not previously covered in the overall humanitarian response plan, the agency announced on Tuesday.

Around $193 million of the overall appeal total, is for “new and emerging needs and changes in operating costs” said Mr. Laerke.

Donations will deliver “critical food and livelihood assistance to nearly 11 million people, essential health services to 3.4 million” and “treatment for acute malnutrition for more than a million children and women,” said Mr. Laerke.

Since 14 August, hundreds of children have been separated from their families amidst chaotic conditions in and around the Hamid Karzai International Airport in Kabul, the UN Children’s Fund (UNICEF) warned on Tuesday.

The agency and its partners have registered approximately 300 unaccompanied and separated children evacuated from Afghanistan to other countries such as Germany and Qatar.

UNICEF said it expects this number to rise, and Executive Director Henrietta Fore, emphasized in a statement that these children “are among the most vulnerable” in the world.

“It is vital that they are quickly identified and kept safe during family tracing and reunification processes…preferably with extended family members or in a family-based setting”.

UNICEF is providing technical support to governments who have evacuated children and those who are hosting them. Teams are on the ground at the Doha air base in Qatar and the Ramstein air base in Germany, and the agency is calling on the Taliban to provide unimpeded humanitarian access to all parts of Afghanistan to gather an accurate picture of those displaced.

Remittances to struggling Afghan families are needed now more than ever, the International Organization for Migration​​ (IOM) said on Tuesday, calling on the nearly six million workers living outside the country to continue providing this vital lifeline.

The financial system is on the brink of collapse, IOM warned, with remittances too in “a parlous state”.

Following the Taliban’s takeover of the country,  the United States froze $7 billion of Afghan reserves, while the International Monetary Fund (IMF) shut off financing to the country, including hundreds of millions of dollars in Special Drawing Rights, which can be converted into currency during times of crisis, said the IOM.

Afghanistan’s Central Bank can only access a fraction of its usual financing. This has meant that Afghan banks’ coffers cannot be easily refilled, resulting in ATMs running out of cash and withdrawal limits being put in place.

In turn, prices for essential goods are soaring. There are fears of food shortages, higher inflation, and a slump in the currency all resulting in an intensification of the humanitarian emergency across the country.

In 2020, formal remittances into Afghanistan totalled upwards of $788 million – approximately 4 per cent of Afghanistan’s total GDP. According to the 2016-2017 Afghanistan Living Conditions Survey (ALCS), remittances represent an income source for almost 1 in every 10 Afghan households.

The emergency response must now better coordinate with Afghans who are abroad, the IOM said.