During a meeting of heads of State, ministers, health leaders, policy-makers, and universal health coverage champions, the UN chief called UHC “the most comprehensive agreement ever reached on global health – a vision for Universal Health Coverage by 2030”. 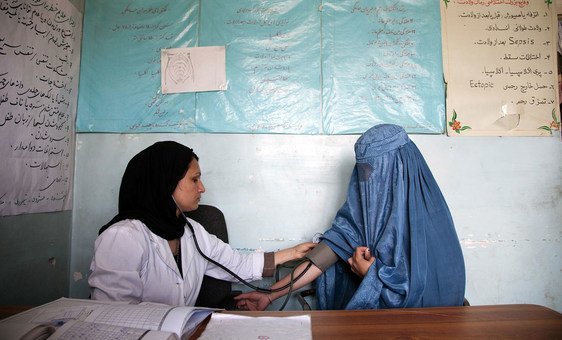 World leaders made the public commitment during the meeting at the beginning of the high level week of the UN General Assembly, themed “Universal Health Coverage: Moving Together to Build a Healthier World”.

He maintained that this “significant achievement” will drive progress over the next decade on tackling communicable diseases, including HIV/AIDS, tuberculosis and malaria, while addressing non-communicable disease and the growing threat of antimicrobial resistance through robust and resilient primary healthcare systems.

“The Political Declaration also states the need to ensure universal access to sexual and reproductive health-care services and reproductive rights”, he continued. “It is essential to protect the wellbeing and dignity of women and girls”.

The UN chief pushed for an urgent “change the financing paradigm” to “step up the pace of investment” towards UHC.

Stressing the importance of “bold national leadership”, the Secretary-General underscored: “Let us all be champions of health for all”.

Universal right, not a privilege

General Assembly President Tijjani Muhammad-Bande opened the meeting by underscoring that access to critical health services “must be a universal right and not a privilege”.

“We must ensure that nations around the world can benefit from each other in medical training, provision of medical infrastructure, among others, if we are to achieve our agreed  SDGs (Sustainable Development Goals)”, he stated.

Mr. Muhammad-Bande said the objective of UHC is to “strengthen our health systems” to guarantee a “healthier life for everyone” by ensuring that people have access to “affordable, preventive, curative and rehabilitative health services”.

According to the General Assembly President, to obtain quality health services, Member States must support each other, including with “integrated, efficient, safe and people-centred care” and continue to invest in research “to better equip us in preventing diseases, among other benefits”.

In conclusion, he pointed to the “profound” challenges we face, saying: “I am confident that if we continue and strengthen international co-operation and seize the opportunities already available, while creating even more opportunities, we can overcome them – together”.

Universal health coverage means all people regardless of their ability to pay, having access to the health care they need, when and where they need it, without facing financial hardship.

World leaders just adopted the high-level @UN Political Declaration on universal health coverage, the most comprehensive health agreement ever made at this level 👉 https://t.co/6N02kTXkfc #UNGA

It's time for #HealthForAll! pic.twitter.com/ojn60oZVSU

Congratulating world leaders, Tedros Adhanom Ghebreyesus, Director-General at the World Health Organization (WHO) told the historic meeting that UHC was “a political choice: today world leaders have signaled their readiness to make that choice.”

The declaration comes the day after WHO and partners flagged the need to double health coverage between now and 2030, or leave up to five billion people unable to access sufficient services.

In adopting the declaration, Member States have committed to investing in policies which would prevent financial hardship from out-of-pocket healthcare payments. It also aims to implement high-impact health interventions to combat diseases and protect women’s and children’s health.

At the same time, David R. Malpass, President of the World Bank Group, informed the meeting that “with the changing nature of work”, the World Bank and International Finance Corporation (IFC) are “supporting the roll-out of mobile health insurance platforms” to extend finance protection to tens of millions of people across 22 countries.

“To improve health outcomes, we must go beyond health”, he flagged. “That means supporting communities by improving education, broadening social services and creating jobs”.

According to Mr. Malpass, investments in health facilities, vaccines and health technology “will be wasted”, if issues like “childhood stunting, girls education and weak social safety nets that leave families vulnerable” are not addressed.

For her part, Melinda Gates, Co-Chair of the Bill & Melinda Gates Foundation asserted that it was now time “to get down to the hard work” of turning “commitments into results”.

“We all have a role to play”, she said. “Donors and country Governments need to move beyond business as usual to bolster the primary health care systems that address the vast majority of people’s needs over their lifetimes”.