In a statement, the Office of the UN High Commissioner for Refugees (UNHCR) said that it was “deeply concerned for the safety and lives of those onboard”.

The boat was first sighted in the waters off Bireuen, a district in Aceh province, on Sunday.

Based on photos and reports from local fishermen, the passengers on the packed boat were overwhelmingly women and children. 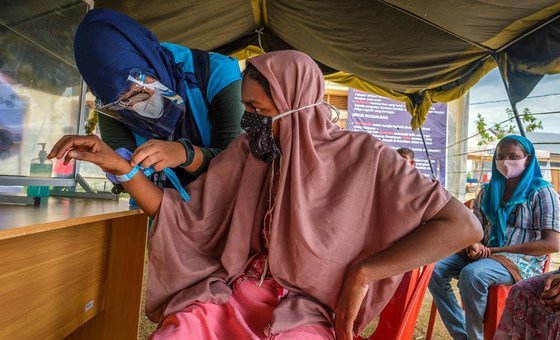 After a seven-month ordeal at sea, a Rohingya refugee is registered at a site in Aceh province, Indonesia., by © UNHCR/Jiro Ose

The boat, which reportedly is leaking and has a damaged engine, is floating in the open seas in the middle of harsh weather and may be at risk of capsizing.

According to news reports, local officials, supported by the police and navy, have provided food, medicine, a new boat engine and a technician to help repair the Rohingya craft, and will push it back to international waters once it was fixed.

To prevent a needless loss of life, the agency strongly urges the Indonesian Government to allow the passengers to safely and immediately disembark.

Since August 2017, more than 700,000 Rohingya fled from Buddhist-majority Myanmar to camps in Bangladesh when the Myanmar military launched a clearance operation in response to attacks by a rebel group. Myanmar security forces have been accused of heinous crimes, including mass rapes and burning thousands of homes.

According to UNHCR, the 2016 Presidential Regulation number 125 on refugee protection includes provisions for the Government to rescue refugees on boats in distress near Indonesia and to help them disembark.

These provisions were implemented in 2018, 2020 and most recently last June, when 81 Rohingya refugees were rescued off the coast of East Aceh.

For UNHCR, Indonesia has, for many years, set an example for other countries in the region in providing refugee protection.

The agency hopes to see the same humanitarian spirit again.

“Rohingya have faced violence, persecution and forced displacement for decades. All those seeking international protection must be allowed safe harbour and granted access to asylum procedures and humanitarian aid”, the statement said.

Agency staff are currently on the ground, working closely with local authorities to assist the Government and local community provide immediate life-saving assistance for the group.

UNHCR is also coordinating with humanitarian partners in preparing a comprehensive response, including a quarantine process in line with international standards and public health protocols.