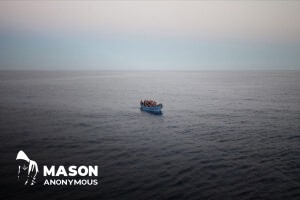 The boat, carrying over 80 people sank on 17 August after its engine exploded off the coast of Zwara, in western Libya. Some 37 survivors were rescued by local fishermen and detained after disembarking.

The tragedy is the largest recorded shipwreck off the Libyan coast this year, according to the UN refugee agency (UNHCR) and the UN’s International Organization for Migration (IOM).

IOM and UNHCR call for urgent action after 45 people died in the largest recorded shipwreck off the Lybian coast this year.

Without a dedicated, EU-led search & rescue operation and disembarkation mechanism, more lives will be lost in the Mediterranean: https://t.co/0fwFQjY5h2 pic.twitter.com/ieSnirf7SJ

More than 300 migrants and refugees have perished trying to cross the sea from Libya to Europe this year, but the actual number of fatalities could be much higher.

‘Risk of another disaster’

UNHCR and IOM called for a review of countries’ approach to the situation, underscoring an “urgent need” to strengthen the current search and rescue capacity to respond to distress calls.

“We fear that without an urgent increase in search and rescue capacity, is a risk of another disaster similar to incidents that saw large loss of life on the Central Mediterranean prior to the launch of Mare Nostrum”, they said.

Mare Nostrum was an Italian operation that contributed to the rescue of around 150,000 refugees and migrants. It was launched in October 2013 and finished a year later.

Support efforts to save lives

The two UN agencies also voiced concerns over delays in rescue and disembarkation, and called on States to swiftly respond to distress calls and provide a predictable port of safety to people rescued at sea.

“Where commercial vessels are the nearest boat capable of carrying out a rescue, they should be promptly provided with a safe port for disembarking the rescued passengers,” the agencies said, adding that that the vessels should not be instructed to return people to Libya, where they are at risk of the ongoing conflict, severe human rights violations, and arbitrary detention.

They also called for lifting legal and logistical restrictions on NGO vessels that have played a crucial role in saving lives at sea amid a sharp reduction in European state-led efforts.

Act against smugglers and traffickers

UNHCR and IOM also urged Libyan authorities to act firmly against smugglers and traffickers preying on vulnerable migrants and refugees.

“This should include disrupting and ending smuggling rings led by criminal groups to prevent further exploitation and abuse,” they said.