Born in Berlin in 1930, she was only three years old when Hitler came to power and the persecution of the Jews in Germany began.

Speaking at a virtual ceremony marking the International Day of Commemoration in memory of the victims of the Holocaust, Dr. Butter said the events that unfolded with the storming of the Capitol, showed that “democracy is vulnerable, and we cannot take anything for granted”.

"As we remember those who died in the Holocaust and honour the survivors, our best tribute is the creation of a world of equality, justice and dignity for all."

“It is up to us, to the people, to preserve and protect our democratic institutions and our Constitution”, she stated, which is why she believes that everyone in the US needs to be educated about what took place during the Holocaust, from those who survived it.

“We have that responsibility to be active citizens, to confront hatred, and to confront the violations of our democracy and in that way, it can be preserved and protected”, she said.

Dr. Butter told of how her family fled to Amsterdam to escape the Nazis, but just two years later, the Nazis invaded the Netherlands, and the “persecution of the Jews escalated”.

“We were deported to two concentration camps”, she said. “First a German concentration camp in Holland, and then to Bergen-Belsen in Germany because my father had managed to apply for Ecuadorian passports thinking that that might save our lives”.

After one grueling year in Bergen-Belsen, their Ecuadorian passports enabled them to be included in a Nazi-administered prisoner-exchange programme.

“But then, sadly my father died on the train to Switzerland and when we arrived in Switzerland, my mother and my brother were hospitalized immediately”, she recalled.

Separated from her family, the then 14-year-old was sent to a refugee camp in Algiers for almost a year, before arriving in the US in 1945.

“I was separated from my mother and my brother for eighteen months before we were reunited in New York to start a new life”, she said. “I’ve lived in the United States ever since and was lucky to take advantage of so many opportunities.”

Dr. Butter acknowledged that it took 40 years before she was able to follow the guidance of Elie Wiesel, who considered that providing testimony and bearing witnesses was the “duty” of all survivors.

Since the late 1980s, she has been teaching students about the Holocaust and the lessons she learned during those traumatic years, affirming the need never to become numb to what is happening in the here and now. 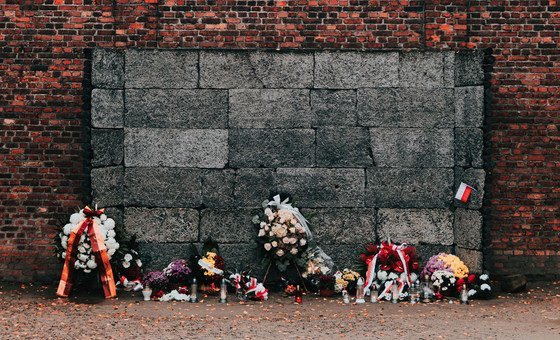 “We have to continue and be awake and act,” she said. “It’s very easy to get immersed in the day-to-day, but there are a lot of things that are happening around us and it’s really important to speak up”.

‘Start from the Holocaust’

According to Israeli Professor, Yehuda Bauer, the Holocaust was an “unprecedented genocide…because of its global form”.

“Jews were intended to be annihilated all over the world”, not only in Europe, he said.

The professor warned that it was “a precedent” that can be repeated, “so, when we deal with mass atrocity hate crimes today, with genocides today, we need to start from the Holocaust…not just for remembering but acting in accordance with the history that we are witnesses of”.

“We have to remember it, and we have to act in accordance with the lessons that we have learned from it”, stressed Professor Bauer.

Ari Folman who also spoke during the day of online commemoration, is the son of Holocaust survivors who met and married in the Lodz ghetto.

His award-winning animated documentary Waltz with Bashir, recounts the story at the Łódź ghetto in September 1942, where for three days, 15,000 Jewish children were deported to concentration camps – never to return.

Mr. Folman quoted the very last sentence of the film in which an elderly Holocaust survivor from Łódź says: “Once we are all gone from this world, all the Holocaust survivors, the point of view that would be taken, looking back at the events, will be so far away – it will be like looking from a satellite on Jewish history in World War Two”.

He said that that was the reason why he was dedicating eight years of his life to “finding new dimensions, new ways of storytelling in regards of the Holocaust”.

He said that for him, it was comics and animation that can be used for educational purposes, “all over the world, to keep the story alive.”