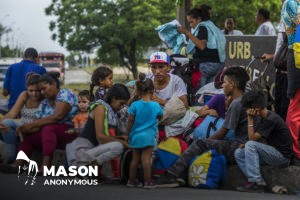 Opposition leader, Juan Guaidó, who declared himself interim leader in January, appeared on social media flanked by members of the armed forces on Tuesday, calling for action to remove Mr. Maduro from power. President Maduro accused his rival of an “attempted coup”.

We are extremely worried by reports of excessive use of force by security forces against demonstrators across #Venezuela. We call on all sides to show maximum restraint and to renounce the use of violence.

In the light of Wednesday’s day of planned protests, OHCHR Spokesperson, Marta Hurtado, said in a statement that reported violence against demonstrators on Tuesday by pro-Government forces, had allegedly resulted in dozens being injured.

“Many have also reportedly been detained”, she added, calling on “all sides to show maximum restraint and on the authorities to respect the right to peaceful assembly. We also warn against the use of language inciting people to violence.”

She said that State authorities had a duty “to ensure the protection of the human rights of all people – regardless of their political affiliation. All sides should renounce the use of violence”, she added.

Protesters supporting the Government also reportedly took to the streets on Wednesday, with Mr. Guaidó addressing his supporters in the capital Caracas, reportedly saying that the demonstrations were “irreversible” and “there is no turning back”.

Ms. Hurtado, urged political leaders “to engage in meaningful discussions to work towards resolving the current crisis”, adding that OHCHR would “continue to monitor developments in the country.”

The UN human rights office does not have a presence in Venezuela, but in March, a five-person team was in the country for a “preliminary technical mission”, deployed ahead of a possible visit by the High Commissioner, Michelle Bachelet.

On Tuesday, UN Secretary-General António Guterres said via his Spokesperson, that he was following events in Venezuela “very closely”, and was reaching out to both sides of the political divide.