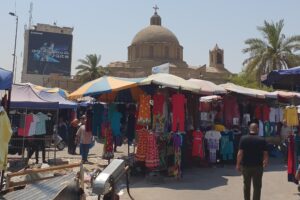 All parties have a moral imperative to prevent violence and bloodshed. pic.twitter.com/6Rnj1hs0cp

Mr. Sadr’s alliance won the majority of seats in last October’s general election, but his parliamentarians resigned en masse after reaching deadlock with a rival Shia bloc over the appointment of a new prime minister, according to news reports.

His supporters have been camped outside the parliament building for weeks, and previously stormed the building to protest the political stalemate and lack of progress.

Several were reported killed during Monday’s clashes after supporters flooded in to the presidential palace.

“The Secretary-General strongly urges all parties and actors to rise above their differences and to engage, without further delay, in a peaceful and inclusive dialogue on a constructive way forward.”

Earlier in the day, the UN Assistance Mission in Iraq, UNAMI, called on all protesters to immediately leave the Baghdad International Zone, vacate government buildings, and “allow the Government to continue its responsibilities or running the State, in service of the Iraqi people.”

UNAMI said the developments marked “an extremely dangerous escalation. State institutions must operate unimpeded in service of the Iraqi people, under all circumstances and at all times. Respect for constitutional order will now prove vital.”

The mission urged all Iraqis to remain peaceful, cooperate with security forces and “refrain from acts that could lead to an unstoppable chain of events.”

UNAMI also calls on all (political) actors to work towards de-escalating tensions and resort to dialogue as the only means to resolve differences. Iraqis cannot be held hostage to an unpredictable and untenable situation. The very survival of the State is at stake.”