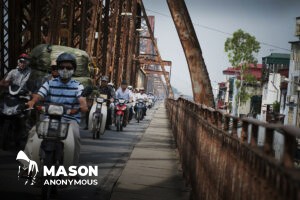 “They are then frequently held incommunicado for long periods in pre-trial detention, with regular reports of violations of the right to a fair trial and concerns about their treatment in detention”, Ravina Shamdasani, an OHCHR spokesperson, said at a media briefing in Geneva.

🇻🇳 #VietNam: Deep concern at use of restrictive laws to arbitrarily detain growing number of individuals. We urge authorities to stop using serious criminal charges against people exercising their #HumanRights & to release anyone detained in such cases 👉 https://t.co/1Ntro8HHc1 pic.twitter.com/iQ8O0DHARe

“Several of them have received lengthy sentences following their conviction for crimes against national security”, she added.

According to OHCHR, Pham Chi Dung, Nguyen Tuong Thuy and Le Huu Minh Tuan, respectively the chairperson, the vice chairperson and member of the Independent Journalists Association of Viet Nam, were convicted by the People’s Court in Ho Chi Minh City on 5 January, of “making, storing, spreading information, materials, items for the purpose of opposing the State” under Article 117 of the country’s Criminal Code.

“All three individuals were held in lengthy pre-trial detention, and despite assurances given by the Government that due process was followed, there are serious concerns about whether their rights to a fair trial were fully respected”, Ms. Shamdasani said.

Ms. Shamdasani went on to note that Viet Nam’s use of vaguely-defined laws to arbitrarily detain people were in violation of Article 19 of the International Covenant on Civil and Political Rights (ICCPR), on the right to hold opinions and freedom of expression. She urged the country to revise and amend the relevant provisions of the Criminal Code to bring them in line with its obligations under the Covenant.

The UN High Commissioner for Human Rights and a number of UN human rights mechanisms, including the Human Rights Committee which oversees implementation of the ICCPR, have repeatedly called on the country to refrain from using restrictive legislation to curtail fundamental freedoms and to uphold its international human rights obligations, she added.

“We also have serious concerns that individuals who try to cooperate with the UN’s human rights bodies are subjected to intimidation and reprisals, potentially inhibiting others from sharing information about human rights issues with the UN,” Ms. Shamdasani said.

“We continue to raise these cases with the Government of Viet Nam, to call on them to stop the repeated use of such serious criminal charges against individuals for exercising their fundamental rights, especially to freedom of expression – and to unconditionally release all those who have been detained in such cases.”