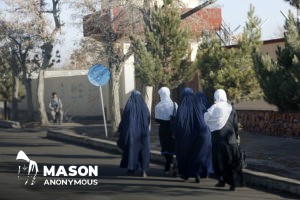 As she opened her briefing, Deputy Secretary-General Amina Mohammed offered her “deepest condolences to the Government and people of Afghanistan”, saying that “indiscriminate attacks that kill women and children are an affront to our humanity and a crime under international humanitarian law”.

Before updating Council members on her recent visit to the country, she affirmed that the UN “stands with Afghans as they work for lasting peace and security”.

Inclusivity isn’t only the right thing to do for women & girls. It is the only way to make durable peace & dev. As a woman told us in #Afghanistan: “It’s an illusion to think that you are going to give away people’s rights, & then have any real peace” Read https://t.co/wtXAWUiM6L pic.twitter.com/b29Aqfop8j

Afghan women on the rise

Under the Taliban government, “women and girls were denied access to education, health services and protection from extreme violence, and could not participate in political or public life”, said Ms. Mohammed.

Her briefing comes just days after returning from her third visit to the country to explore UN support for the ‘women, peace and security’ agenda. She was joined by UN Political and Peacebuilding Affairs chief, Rosemary DiCarlo, the Executive Director of the UN Population Fund (UNFPA), Natalia Kanem, and the head of UN Women, Phumzile Mlambo-Ngcuka.

While there, Ms. Mohammed held talks with President Ashraf Ghani, the Chief Executive, the First Lady, as well as senior leaders and religious scholars; and made a field visit to Bamiyan Province and spoke to women leaders, decision-makers and health care workers.

“In the past 18 years, there has been significant progress”, the UN deputy chief reported, pointing out that women encumber senior roles in the Defence, Foreign Affairs and Interior Ministries; 27 per cent of the civil service is female; and women are serving as mayors and provincial governors.

Since the fall of the Taliban, nine out of 11 million Afghan children are now enrolled in school; investments in reducing maternal mortality are saving thousands of lives; and improved infrastructure and power supplies are connecting remote areas to national economic opportunities.

Afghanistan has “done more to invest in women’s leadership” than many countries with greater means and women are “rising to reclaim their rightful place in all areas of society”, Ms. Mohammed spotlighted.

“The 2030 Agenda for Sustainable Development holds great promise for the lives of Afghans across the country,” she said highlighting that 24 UN agencies are partnering with the government on issues ranging from food security to clean water and the rule of law, “often risking their lives”.

On the Sustainable Development Goals (SDGs), she conveyed that SDG 5, on gender equality, is “essential to ensure that women have access to education, health care and decent work, and that women are represented in all areas of society and in all political and economic decision-making processes, including in government and in peace negotiations”.

“SDG16 on peace, justice and strong institutions will also be essential to hold free, fair and credible elections, to build trust in state institutions, and to facilitate reconciliation and the reintegration of former combatants after the signing of any peace agreement”, added the UN deputy chief. 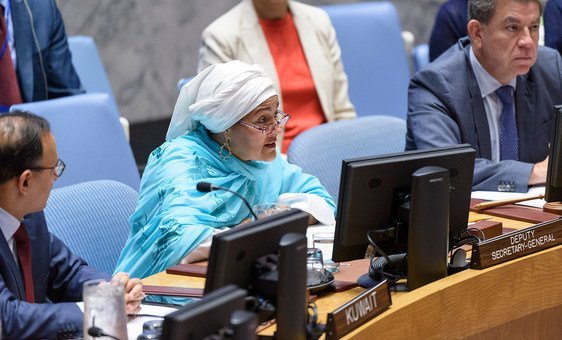 Deputy Secretary-General Amina Mohammed briefs the Security Council on the situation in Afghanistan and her recent visit to the country. (26 July 2019), by UN Photo/Loey Felipe

She brought to light that in the short-term, 6.3 million Afghans need humanitarian aid across the country, adding that “the Humanitarian Response Plan is just 27 per cent funded”.

“We must increase that level urgently, to provide immediate support and protection to displaced people and those in greatest need”, explained Ms. Mohammed.

“As we witnessed again yesterday, conflict continues in Afghanistan”, Ms. Mohammed said, noting that in the first five months of this year, conflict displaced more than 100,000 people, which “increases the risk of gender-based violence”.

And in areas where the Taliban has reclaimed control, “there are reports of honor killings, stoning and other attacks on women’s rights”, she lamented, adding that “peace, security and economic stability are urgently needed”.

All the women she spoke to “wanted an inclusive peace centred on women, as well as victims and survivors”, she told the Council.

“Afghan women, like women everywhere, must play a part in decisions that will affect their future”, she spelled out. “Inclusivity is not only the right thing to do for women and girls, it is the only way to make durable peace”.

Sustainable peace will take time and must address violations and divisions of the past for the country to achieve closure.

“Inclusion and consensus are also essential to creating the greatest possible peace dividend, benefitting all parts of the economy and all sections of society…to address stigma and discrimination based on gender, ethnicity or regional differences”, she elaborated.

With women playing “a central role” in creating peaceful, inclusive communities with opportunities for all, she said, “Afghanistan is at an important crossroads” and needs the support of the entire UN system and international community “to invest in building on the gains, while sustaining peace”.

“I urge this Council to do all in its power to support all Afghans in realizing their hopes and aspirations for lasting peace, stability and prosperity”, concluded the Deputy Secretary-General.

Gearing up to vote

Taking the podium after Ms. Mohammed, UN political chief Rosemary DiCarlo recalled that Afghanistan is marking the centennial of its independence, saying that it is at “a pivotal juncture with an unprecedented opportunity for peace”. 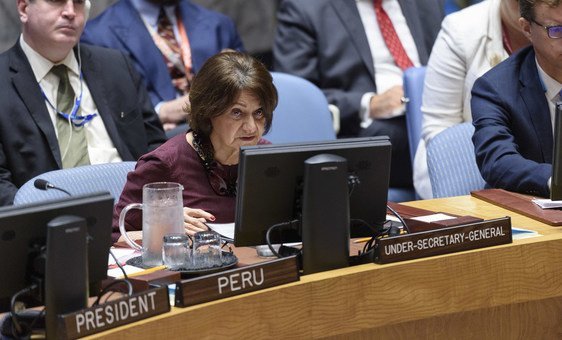 She underscored the need that the upcoming presidential elections are “credible and held on time”, adding that the UN is providing technical assistance and that the Independent Electoral Commission has “made steady progress” in its preparations – with two non-voting UN members embedded in each Commission.

A $149 million election budget has been finalized, with the Government covering $90 million and the international community the rest.

“Over half a million more Afghans have registered, of which some 36 per cent are women”, she updated the Council. “This is the first time that citizens were given an opportunity to review and make corrections to the 2018 voters list”.

Despite this progress, challenges remain, including the recruitment and training of thousands of polling staff.

“With only nine weeks remaining to the polling and the Commissions working against the clock”, she underscored that there is no room for technical or political delays, adding also that “a level playing field amongst all candidates is key for credible elections”.

Credible elections are “vital” to give the newly-elected president “the authority needed to bring the country together in the peace process”, she maintained.

Meanwhile, direct talks between the United States and the Taliban continue.

And while this is “an important step forward” towards formal negotiations between the Government and the Taliban to reach a sustainable peace agreement, Ms. DiCarlo affirmed that additional intra-Afghan conferences are planned.

“A political solution to the conflict in Afghanistan remains more relevant than ever, as civilians continue to bear the brunt of the conflict” she stressed, calling on all conflict parties “to respect international humanitarian law, to ensure access for humanitarian agencies to provide life-saving assistance and to distinguish between combatants and civilian targets to protect civilians from hostilities”. 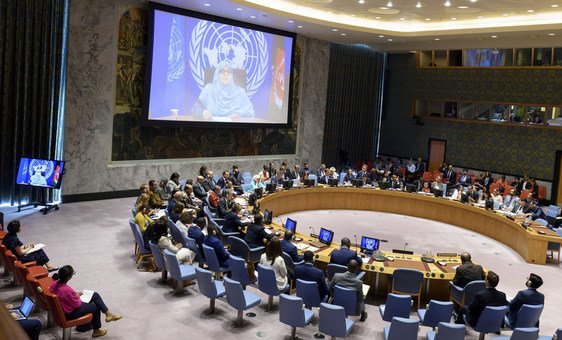 In closing, Ms. DiCarlo underscored that “Afghans deserve peace and the right to choose their representatives”.

“We urge this Council to do the same”, she concluded.

A view from the ground

Addressing the Council via videoconference from Kabul, Jamila Afghani of the Women’s International League for Peace and Freedom-Afghanistan, underscored the impact of the conflict on ordinary Afghans, who live in constant insecurity yet find themselves on the side lines of peace talks.

Since September 2018, the US and other countries had facilitated efforts towards a negotiated peace, but she stressed that there has been a clear absence of meaningful participation by women and other actors, notably the direct victims of war.

“Afghan women must be able to meaningfully participate in decisions that affect them,” she said, and urged the Council to ensure clear procedures for engaging Afghan women from diverse backgrounds in peace negotiations and conflict resolution efforts, especially as negotiators and religious leaders who can bridge political gaps on the path to peace.

She added that the Council should ensure that this year’s elections include enhanced security for women voters and candidates, and for networks involving the Government, civil society and other stakeholders to promote women’s participation.