More than three generations have passed since the end of the Second World War, but antisemitism, Islamophobia, racism and xenophobia that continue to poison societies around the world, makes the lessons learned then, arguably more important today than ever before.

“Stories of Holocaust survivors are stark reminders of the need to fight injustice and stop hatred”, said Tracey Petersen, Manager of the UN’s Department of Global Communications’ Education Outreach Section. 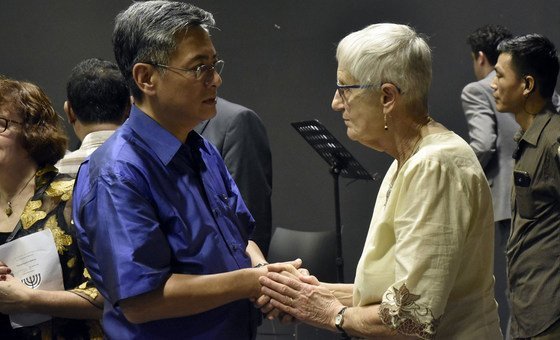 Holocaust survivor Vered Kater attends the annual observance of the International Day of Commemoration in memory of the Holocaust at the UN information Center (UNIC) in Yangon in 2019., by UNIC Yangon

As time continues to silence the voices of those who bore witness to the horrors of the Holocaust, our latest podcast series from UN News, In their words, records for posterity the honest and still shocking testimony of survivors.

“Each story is a stark testimony of witness to the horrors of racism and antisemitism left unchecked, and the catastrophic loss to the world, wreaked by genocide”, said Ms. Petersen.

Preserving the testimonies of those who survived the atrocities committed by the Nazis and their racial collaborators in the 1930s and 1940s, each of the series’ four episodes features a personal conversation with a remarkable Holocaust survivor, focusing on a defining chapter of their lives.

Referring to their stories as “voices of resistance, resilience and courage to consider a future when the Holocaust had all but destroyed their pasts”, Ms. Petersen said: “The power of a survivor’s voice is that it reminds us of the human cost paid, and our responsibility to our fellow humans to respond to injustice so that all can live with dignity and in peace”.

A lesson in listening

The series opens with Vered Kater looking back at her childhood in the Netherlands, a few years after the end of the Second World War, searching for an answer to the question that has marked her life: Why were the Jews so hated?

Setting off for Israel to pursue her quest, Ms. Kater realized her destiny: to provide for others the type of intensive care that helped deliver her from the Holocaust.

Listen to her story:

Each of the stories featured in the podcast shared a common thread.

“The commonalty and the beauty in these stories is the gratitude expressed for the unsung heroes: The people who heard their sorrows and consequently helped save their lives; non-Jewish friends, members of a convent, or their very own family who sheltered, supported and encouraged them”, said podcast host and producer, Natalie Hutchison, who interviewed each survivor.

Veronica Phillips was only 17 as she waited in line at the Ravensbrück concentration camp for the gas chambers when her German language skills literally saved her life. In the waning days of the war, she was selected to work at Penig labour factory.

After more than 70 years of silence, the now 94-year-old shared her testimony in the hope that future generations would learn from her tragedy.

“Proximity creates empathy”, said Ms. Hutchison. “Having the conversation with the people who suffered firsthand was a lesson in listening, and about listening”. 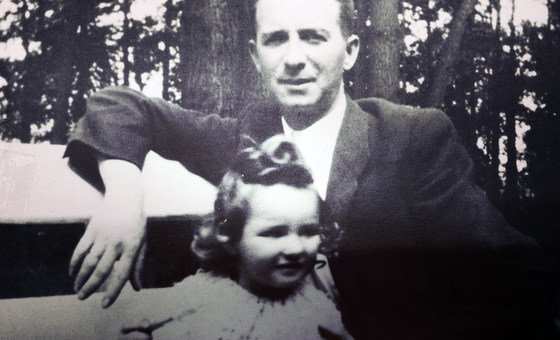 And Polish survivor Halina Wolloh, was just three when the Nazis stormed her family’s apartment and forced them into the Warsaw Ghetto.

Hers is a rare story of fortune as she and her family all survived to reunite and settle in Lima, Peru – but not before their share of hardships.

Ms. Wolloh’s upcoming interview was conducted in Spanish and later translated and will also published in English.

“The seemingly passive act of listening opened a door for humanity to enter”, observed Ms. Hutchison.

Ms. Petersen is clear that podcasting, is a powerful way to capture these essential stories, allowing the audience to feel connected to the storyteller, providing an intimacy that touches the listener as if the speaker is talking directly to him or her.

“As you listen, you are reminded of our common humanity”, she said, noting that in the context of the Holocaust, the audience “not only connects on an emotional level to the voice of the survivor, but through that experience, learns from the individual story about the larger historical context”.

Audio is especially powerful given the movement restrictions associated with the COVID-19 pandemic, and a way to easily move across different continents, providing “four moving tributes to the survivors who generously agreed to share their stories and insight with us”, she explained.