She was in the Indonesian capital ahead of the Global Platform for Disaster Risk Reduction, taking place this week on the island of Bali.

Civil society is the bedrock of survivors of gender-based violence.

The @UN works with Yayasan Pulih in Indonesia to provide mental health and psychosocial support to women. pic.twitter.com/9FIqBta6WB

But before discussing disaster risk reduction strategies with policymakers, humanitarians, and members of the private sector there, she heard from 15 youth leaders from across Indonesia, about the struggles they have faced, implementing climate-related projects in their own communities.

After listening to presentations on projects that ranged from founding digital food banks, to charting air pollution – and launching education courses on sustainable farming – the Deputy Secretary-General said she wanted to relay “the energy, the anger, the frustration, the optimism, and the hope,” of youth in Indonesia, during her meetings with delegates in Bali in the days ahead.

Bali is appropriate venue to host the Global Platform on Disaster Risk Reduction. Situation along the volatile Pacific Rim of Fire – where tectonic plates meet along a volcanic fault line – Indonesia recorded 3,034 natural disasters in 2021, according to the national disaster risk agency, which impacted 8.3 million people and caused at least 662 deaths.

Those figures will skyrocket if the world continues on its current trajectory of accelerated global warming towards 3.2 degrees above pre-industrial levels – more than double the 1.5 degrees limit scientists say is essential for avoiding the worst impacts of the climate crisis.

The IPCC’s latest report reaffirms that any rise above 1.5 degrees would lead to a dramatic increase in extreme weather events such as floods, which made up more than a third of all disasters in Indonesia last year.

But acting on climate change is not only a national imperative. In December 2021, Indonesia took up the Presidency of the G20, whose members account for 80% of global greenhouse gas emissions.

As the world’s largest archipelagic nation, Indonesia is “well placed to advocate for the interests of less developed countries and small islands states on the world stage,” says UN Resident Coordinator for Indonesia Valerie Julliand. “That includes holding rich countries to account for their commitment to mobilize $100 billion a year, to help poorer countries deal with climate change.” 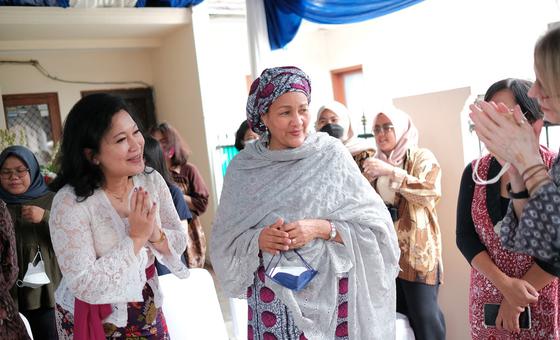 Indonesian President Joko Widodo’s appearance at the COP26 climate change conference last year in Glasgow served as an example of how seriously Indonesia takes the issue.

Home to the world’s third largest area of forest after Brazil and Democratic Republic of Congo (DRC), Indonesia pledged to halt or reverse deforestation by 2040 at the two-week climate summit in Glasgow. It also joined Member States in promising to “phase down” coal use.

However, Indonesia has not committed to ending its pipeline of coal generation projects under its current ten-year national development plan. The pipeline, which includes 13.8 GW of new coal capacity by 2029, more than 10GW of which is already under construction, is not compatible with Indonesia’s climate goals, environmental groups argue.

Besides being the world’s largest coal exporter, coal mining employs an estimated 450,000 Indonesians and supports millions more – mostly in economically impoverished areas of Kalimantan and Sumatra.

Helping Indonesia transition from coal to clean energy generation is the focus of the FIRE Dialogue partners, an international platform that brings together UN representatives, ambassadors and diplomats from multiple countries, and organizations such as the Asian Development Bank.

Optimistic for the future

“It is going to be difficult, but I am optimistic”, the Deputy Secretary-General told a UN in Indonesia Town Hall event, following a meeting with FIRE Dialgoue partners on Monday. “We need concerted efforts to accompany this country in the next five years to really make that pivot towards renewable energy and a green and blue economy.”

She added that young people would be at the centre of this pivot, including through making sure critical facts are widely understood, among them, that the green and blue economy, can create three times as many jobs as those coming from the fossil fuel sector.

It was a sentiment that carried echoes of the conversations at the weekend with young climate leaders. After the 15 young activists presented the objects that helped sum up their inspiring work, the deputy UN chief shared some significant objects of her own, which she had brought along to the conversation.

These included a piece of sea glass, and a seashell, with a pale pink exterior.

The shell, she said, represented communication, and specifically, the need to get beyond the shell’s hard exterior to communicate a fundamental inner truth: “human beings picked a fight with nature. Nature fought back. And now we have to make peace with nature.”