The first Global Refugee Forum ended in Geneva on Wednesday with more than 770 pledges to support refugees and the communities where they live.

The Forum is a key element of the Global Compact on Refugees, signed last December, and saw participation from over 3,000 representatives from governments, international financial organizations, business, civil society, and humanitarian and development organizations.

UN High Commissioner for Refugees, Filippo Grandi, said the event represented a “decisive shift” towards long-term action to assist the more than 25 million people worldwide who have fled their homelands due to conflict, persecution or violence. 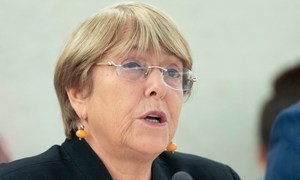 Demonstrations in Venezuela must be allowed to take place ahead of elections next year, the UN High Commissioner for Human Rights has said.

Michelle Bachelet described ongoing misery for the country’s poorest citizens, as they live with hyperinflation amid “failures in public service”.

Speaking in the Human Rights Council in Geneva , she said alleged extrajudicial killings have also taken place since August.

The victims are “mainly young men (targeted) by members of the Special Action Forces (FAES) in the context of security operations carried out in marginalized neighbourhoods”, she stated. 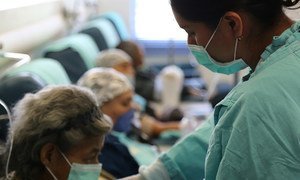 More women could soon have access to an affordable version of an expensive life-saving breast cancer treatment, the World Health Organization (WHO) has announced.

WHO has pre-qualified the biosimilar version of the medicine trastuzumab, which has shown high efficacy in curing early stage breast cancer.

As the medicine costs around $20,000, it is out of the reach of many women and national health care systems.

However, biosimilar trastuzumab—which is derived from biological sources— is around 65 per cent cheaper.

The full story can be found here.

Asia-Pacific trade declines for first time in a decade 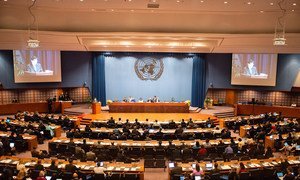 Trade in the Asia-Pacific region has declined for the first time since the global economic crisis a decade ago, the UN office for the region, ESCAP, reported on Wednesday.

Although economies are expected to bounce back in 2020, ESCAP said they are still facing risks related to trade tensions between the United States and China.

The global slowdown in economic growth, combined with the heightened tensions, also affected merchandise trade in the region, particularly for economies closely integrated with China.

The UN office estimated that the tariff war’s impact on gross domestic product (GDP) could reach as much as $400 billion worldwide and $117 billion in the region. 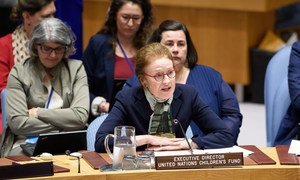 The head of the UN children’s agency, UNICEF, is calling for greater protection for young people standing up for a fairer world.

UNICEF Executive Director Henrietta Fore made the appeal as scores of children and young people worldwide have been taking to the streets in recent months to demand action on issues such as climate change, corruption and inequality.

Ms. Fore observed that some have been jailed, injured or even killed, while schools have been closed and public services interrupted.

She said: “It is therefore a heartbreaking irony that, in standing up for their fundamental rights, many children and adolescents are simultaneously having their rights taken away.”

The UNICEF chief stressed that children’s rights to peaceful assembly and freedom of expression are enshrined in the Convention on the Rights of the Child, the most widely ratified human rights treaty in the world.

She said fundamental guarantees for the protection of children must remain applicable everywhere and at all times, including during civil unrest or armed conflict.

Listen to or download our audio News in Brief for 18 December on SoundCloud: