“Eliminating any cancer would have once seemed an impossible dream, but we now have the cost-effective, evidence-based tools to make that dream a reality”, WHO Director-General Tedros Adhanom Ghebreyesus said in a statement.

“This is a big milestone in global health, because for the first time the world has agreed to eliminate the only cancer we can prevent with a vaccine and the only cancer which is curable if detected early”, WHO Assistant Director-General Dr. Princess Nothemba Simelela told a news conference. “We have an opportunity, as the global health community, to end the suffering from this cancer.”

Tackling the disease is expected to bring huge economic dividends because of the improved prospects for women’s participation in the workforce, with $3.20 returned to the economy for every dollar invested – or $26 once the benefits for families, communities and societies are factored in.

Cervical cancer is the fourth most common cancer among women globally. Death rates are three times higher in in low- and middle-income countries than in high-income countries. 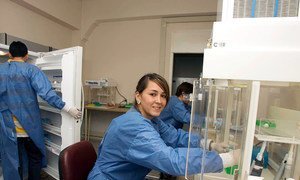 The disease is caused by two types of human papilloma virus (HPV), a sexually-transmitted infection that exists in more than 100 different forms, with symptoms that can be painful and stigmatising.

There are already three vaccines available to combat HPV and several more in the pipeline, but currently their availability is skewed towards richer countries, and the world needs to come together to help poorer countries get access to vaccines, said Dr. Simelela.

“There is also new technology that is based on artificial intelligence, which can be used to screen women for cervical cancer. And if these technologies are used, we would be able to get a diagnosis of cervical cancer within 15 to 20 minutes”, she said.

That would be a huge advance from the current timeframes which can be a month or longer, especially if women live far from their nearest health facilities, she said.