He described the climate and environmental crises, coupled with the ongoing economic and social fallout of the COVID-19 pandemic, as “the defining issues of our time,” reminding that “our collective response will chart our course for decades to come”.

This year's Commission on the Status of Women is all about #ClimateChange.

Through events and negotiations, @UN_CSW is a critical opportunity to advance gender equality in #ClimateAction.

Let's work together to deliver an ambitious outcome.#CSW66

Noting that the “unprecedented emergencies of the climate crisis, pollution, desertification and biodiversity loss, coupled with the COVID-19 pandemic, and the impact of new and ongoing conflicts, have accelerated and intensified into widespread and interlinked crises that affect us all,” he told the Commission at the hybrid opening day event that the damage would not be meted out equally.

“Everywhere, women and girls face the greatest threats and the deepest harm”.

And while they are taking action to confront the climate and environmental crises, they continue to be largely excluded from the rooms where decisions are taken.

Women and girls living in small island nations, least developed countries, and places affected by conflict, are impacted most of all, the UN chief said.

Their nutrition and livelihoods are disproportionately affected by extreme weather, and they suffer most when local natural resources come under threat.

And with increasing climate shocks, evidence points to a link between child marriage and exploitation.

“When climate disasters strike, as they do with increasing frequency, research shows that women and children are up to 14 times more likely than men to die,” he continued.

Mr. Guterres expressed his deep alarm over the increase in violence and threats against women human rights defenders and environmental activists.

“Gender discrimination means just a tiny proportion of landowners and leaders are women,” he explained, saying that their needs and interests are “often ignored and pushed aside” in policies and decisions on land use, pollution, conservation and climate action.

He informed the participants that just one-third of decision-making roles under the Framework Convention on Climate Change (UNFCCC), Kyoto Protocol and Paris Agreement are occupied by women; while they account for only 15 per cent of environment ministers.

Moreover, only one-third of 192 national energy frameworks include gender considerations, and they are rarely considered in climate financing.

“This demonstrates once more that we live in a male-dominated world with a male-dominated culture,” the UN chief spelled out highlighting “a millennium of patriarchy that excludes women and prevents their voices from being heard.”

“We cannot realize any of our goals without the contributions of all…including men and boys…working for women’s rights and gender equality”.

The Paris Agreement addresses biodiversity loss, land degradation and pollution –vital to creating lives of dignity for all on a healthy planet.

Women and girl leaders, farmers, policymakers, economists, lawyers and climate activists are vital to build the sustainable economies and resilient societies of tomorrow.

“But we will not get there without women’s full and equal participation and leadership,” he stressed.

Over the past two years, gender inequalities and injustices have been highlighted and exacerbated by the COVID-19 pandemic, he said.

Millions of women have been thrown out of work and confronted with “an impossible choice” between earning an income or doing unpaid but essential care work as millions of out-of-school girls “may never return.”

“Gender equality and women’s rights must be at the heart of a renewed social contract that is fit for today’s societies and economies.” 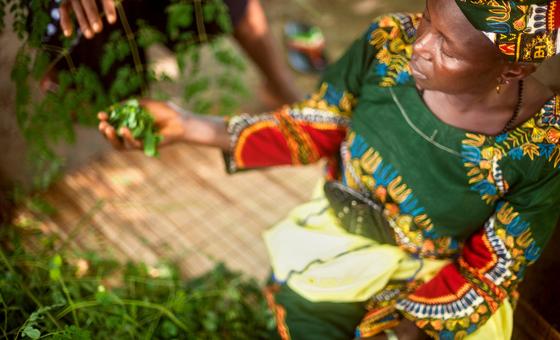 At the global level, the Secretary-General cited his Our Common Agenda report, which proposes a power rebalance through a New Global Deal and a peace agenda to reduce all violence – including gender-based violence – and put women and girls at the heart of security policy.

He also reminded that the UN is working to support the participation and leadership of women at every stage of building and maintaining peace, including through his special envoys and representatives, who are designing and supporting strategies for more inclusive peace processes.

Mr. Guterres added that gender advisers in UN Special Political Missions promote women’s participation and ensure that their priorities are “integral” to all political efforts, describing women’s equal leadership as “not only a matter of justice…[but] vital to create peaceful, resilient communities and societies”.

“We cannot separate the perilous state of peace in our world from long-standing structures of patriarchy and exclusion,” he said, citing Russia’s invasion of Ukraine as “another clear demonstration of this everywhere”.

UN Economic and Social Council (ECOSOC) President, Collen Vixen Kelapile, reminded that as a subsidiary body, CSW continues provide oversight and monitoring the implementation of the 2030 Agenda for Sustainable Development and the development goals, particularly SDG 5 on Gender Equality.

“In this connection, the Commission’s work will remain central to the ECOSOC system for guiding a people-centred and gender-sensitive recovery from the COVID-19 pandemic,” he said, reminding that the High-Level Political Forum in July will examine implementation progress on SDG 5, alongside other global goals.

Women are stewards of our planet but feminist leadership remains in a minority. It is more than time to change this. #CSW66 pic.twitter.com/3z0EnGe84o

CSW’s work remains “essential” in strengthening the global framework for gender equality, empowerment of women, and advising policy-makers on “how to advance these important goals in an integrated and cross-cutting manner.”

“This needs to be corrected,” he asserted. “The UN cannot call for implementation of gold standards throughout the world as far as gender equality and women’s empowerment is concerned but not implement this standard at home”.

Mr. Shahid said that he would “personally” lead in calling for the next Secretary General to be a woman

“Join me in this clarion call,” he invited the participants.

The Executive Director of UN Women, Sima Bahous, opened her address by drawing attention to “all crises and conflicts,” reminding that they “exact their highest price from women and girls” – from Myanmar to Afghanistan, the Sahel to Haiti, and Syria to Somalia to Yemen and Ethiopia, with “the horrifying war in Ukraine,” the newest addition.

Echoing the Secretary-General, she said, “the invasion of Ukraine must end, war must end, peace must prevail.”

“We see with every passing day the damage done to the lives, hopes and futures of Ukrainian women and girls,” Ms. Bahous continued, reiterating solidarity with the women of Ukraine while paying tribute to “their courage and resilience”.

“And I pray that they – and all those who are experiencing conflict – will soon know peace”.

Executive Director of the UN Environment Programme (UNEP) Inger Andersen said the world had had “enough of male-dominated solutions”.

In reinvigorating environmental multilateralism, she said that it is “critical” that women be put “at the heart of decision-making.”

“We need to ensure that their leadership and meaningful contributions in these areas are included in decision making processes.”

“Women and girls across the world are looking up to the Commission as the leading body on gender equality and empowerment of women for guidance.”

Click here to watch the opening session in its entirety.