😷 Displaced women in Yemen are sewing masks to support their families and help fight COVID-19. pic.twitter.com/VWKO5tm0ER

He expressed his extreme concern over the situation in Yemen, where six years of war have “devastated the lives of millions” and undermined regional confidence.

While more than 1,000 prisoners were released last week in what he called “a ray of hope”, Mr. Guterres underscored that “the security situation remains fragile”.

Over recent weeks, the conflict has escalated in Al Jawf, Ma’rib and Hudaydah governorates, with the latter being of significant concern as it risks undermining the 2018 Stockholm Agreement, the historic but fragile UN-brokered accord between the internationally-recognized Government and the Houthis, who are fighting for control of the country.

At the same time, Yemen remains the largest humanitarian emergency where looming famine is compounded further by the continued spread of COVID-19.

The top UN official called the conflict a reminder that “urgent and immediate regional challenges” must be addressed, to stem “farther and wider” instability.

“We need an immediate ceasefire and return to the negotiating table to work out a political settlement to end the war”, spelled out the UN chief.  “Nothing less will suffice”.

Recalling his appeal for “an immediate global ceasefire to focus on the one true fight:  the battle against the COVID-19 pandemic”, the UN chief reiterated the need to step up efforts.

“The clock is ticking – and people are dying”, he attested.

See here for recent UN News coverage on the Secretary-General’s call for a global ceasefire as the world battles COVID-19.

Mr. Guterres commended the Gulf countries that supported his call and urged others to rise “in a spirit of solidarity” to “waive any sanctions” blocking access to vital humanitarian and medical assistance amid the pandemic.

Looking at the wider Persian Gulf region, the UN chief said, “it is clear that tensions are running high.  Confidence is low”.

He pointed to numerous security incidents since May 2019 that have heightened frictions to “new levels” and noted that they have served to underscore the urgent need to “work collectively to lower tension and prevent conflict”.

“These are a stark reminder that any miscalculation could quickly escalate”, said the Secretary-General.

According to Mr. Guterres, the first step towards de-escalation is to identify “viable confidence-building measures” to address issues of mutual concern.

The clock is ticking – and people are dying – UN chief

However, consensus from all the key actors involved has yet to be achieved.

In the longer term, he advocated for “a new regional security architecture” to address the legitimate security concerns of all involved.

The UN chief commended the efforts of all in the region who have worked to help resolve tensions and offered to convene “any forms of regional dialogue that may have the necessary consensus of all the relevant parties involved”.

In closing the UN chief told ambassadors that “the enormity of the challenges ahead should not deter us”.

He encouraged everyone to move beyond destructive rivalries and “recognize what unites us” to “create a climate of trust” and improve the prospects for regional dialogue.

“Let us keep the interests of the region’s people front and centre – their aspirations for freedoms, opportunities, better standards of life and peace”, upheld the Secretary-General. “This, above all, should compel us to intensify our collective efforts”. 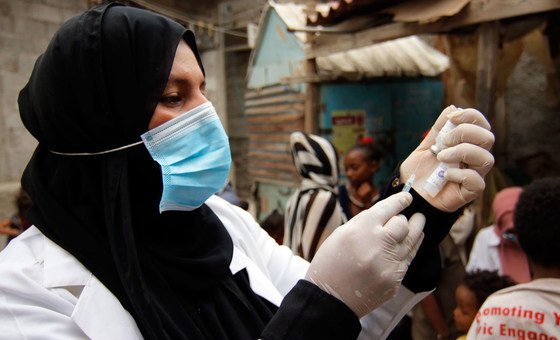