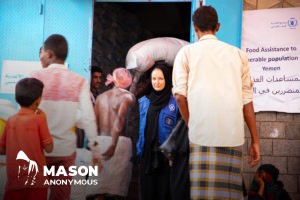 During the four years of violence, many districts have remained inaccessible for humanitarians, causing conditions facing civilians wracked by hunger, cholera, and bombardment, to “significantly deteriorate”, according to the World Food Programme (WFP).

“Yemen is a graveyard for the living.

War destroyed my hope and broke all my dreams. Every day, I come down to this muddy hole that looks like hell to me and try to find anything to make a fire and cook.”

7 women share their stories of #Ramadan in #Yemen https://t.co/irn5jcuZ0V

WFP Spokesperson Herve Verhoosel, told journalists in Geneva that on Thursday the agency had succeeded in distributing food and aid to more than 5,000 people from “896 households living next to the frontlines of Nihm district in Sana’a governorate.” He highlighted that this was “the first time WFP and a cooperating partner, Islamic Relief, (have) reached people living inside the militarized zone of Nihm.”

According to WFP, a one-off distribution providing rations for two months, was conducted in two food distribution points, marking an important breakthrough as the district has been a frontline conflict area, which is very difficult to access, for a prolonged period. The area close to the Saudi border, north east of the Houthi-held capital Sana’a – has been in the hands of the movement, officially known as Ansar Allah, since 2014.

Mr. Verhoosel also reported that the agency has gained access to “the besieged area of Dhuraimi city in Hudaydah governorate, which has seen intense conflict and insecurity for a prolonged period.” The city of Dhuraimi is also on a frontline between the warring parties, and WFP noted that both sides had helped with access.

Mr Verhoosel told journalists that “WFP provided two-month general food assistance rations, water, hygiene kits and dignity kits from UNICEF and UNFPA, and other food assistance.” He reiterated that “this is the first humanitarian assistance to reach civilians in the city for a year.”

“We are not there yet for the moment because of those distribution issues that we have.” Even in Sana’a, reports by NGOs working in Nihm, indicate that although access to some areas was possible, some communities where fighting is on-going, remain out of reach.

WFP together with Islamic Relief has been working to open up access to these vulnerable populations by establishing two food distribution points and coordinating closely with other agencies.

WFP is committed to “working with both sides” of the conflict, said Mr. Verhoosel,“to try to facilitate as much as possible not only the security situation but also of course the access.”

In an update from the key port city of Hudaydah, WFP also said that grain supplies held in a silo close to the former front lines of conflict, are still being fumigated, but it was still not possible to say how much of it was fit to eat.

The Red Sea Mills contained enough grain to feed 3.7 million for a month, but “the total quantity of wheat that will be fit for human consumption is still not determined at this stage”, said Mr. Verhoosel.

Each of the 11 silos contain an estimated 3,500-4,000 metric tonnes of grain and 40 local workers from the area have been hired to finalize cleaning, and WFP is looking to bring in additional equipment.

“WFP appreciates the cooperation from all parties on the ground that has made this progress possible”, added the WFP Spokesperson.