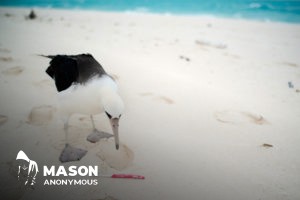 These include getting caught up in fishing gear and other plastic debris; confusing plastic waste with food and eating it, which fills their stomachs and causes them to starve; and using debris as material for nest-building, which can harm their chicks.

The world is choking on plastic and so too are our birds, on which so much life on Earth depends Joyce Msuya, acting Executive Director of the UN Environment Programme

One-third of global plastic production is non-recyclable and at least eight million tons of plastic flows unabated into our oceans and water bodies each year,” said Joyce Msuya, acting Executive Director of the UN Environment Programme (UNEP). “It is ending up in the stomachs of birds, fish, plankton, and in our soil and water. The world is choking on plastic and so too are our birds, on which so much life on Earth depends.”

Discarded fishing gear is the biggest reason for birds becoming entangled in plastic, particularly seabirds, many of whom are not detected because they die far from land, out of sight of humans.

Online tools have helped scientists to build up a comprehensive picture of the effect that discarded fishing equipment is having on birds.

Studies by Peter Ryan, Director of the Fitzpatrick Institute of African Ornithology at the University of Cape Town, have shown that almost all marine and freshwater birds are at risk of entanglement in plastic waste and other synthetic materials. A wide diversity of land birds, from eagles to small finches, are also affected, and these numbers are expected to increase.

Research shows that about 40 per cent of seabirds have consumed plastic. This can kill them or, more likely, cause severe injuries, and plastic accumulations can block or damage the digestive tract or give the animal a false sense that they are no longer hungry, leading to starvation.

UN Photo/Martine Perret
Plastic bottles and garbage waste from a village in Timor-Leste wash on the shores of a river and then spill into the sea.

UN action to reverse the trend

In an effort to tackle plastic pollution, UNEP launched the Clean Seas campaign in 2017, which asks individuals, governments and business to take concrete steps to reduce their own plastic footprints.

The Convention on Migratory Species, and the African Eurasian Waterbird Agreement (AEWA), which are backed by UNEP, work with countries to prevent plastic items from entering the marine environment. A recent resolution on seabird conservation, adopted by AEWA member countries in December 2018, includes a series of actions that countries can take to reduce the risk caused by plastic waste on migratory birds.

At the Conference of the Parties to the Convention on Migratory Species in 2017, countries agreed to address the issue of lost fishing gear, by following the strategies set out under the Food and Agriculture Organization (FAO) Code of Conduct for Responsible Fisheries. Efforts to phase out single use plastics and to redesign plastic products to make them easier to recycle are underway in many countries.

“There are no easy solutions to the plastic problem. However, as this year’s World Migratory Bird Day underlines, everybody on this planet can be part of the solution and take steps to reduce their use of single-use plastic,” said Jacques Trouvilliez, Executive Secretary of the AEWA. “Tackling this problem globally will not only be beneficial for us, but also benefit our planet’s wildlife, including millions of migratory birds.”