According to the World Meteorological Organization’s (WMO) flagship State of the Global Climate report, the global average temperature in 2020 was about 1.2-degree Celsius above pre-industrial level.

State of Global Climate 2020:#COVID19 combined with extreme weather in a double blow for millions but failed to put a brake on #climatechange and accelerating impacts.
⬆️ CO2
🌡️temperatures
🌊 heat and acidification
⬇️ ice and glaciers🌡️https://t.co/MqpKp7KthJ#ClimateAction pic.twitter.com/fBfgodpI3E

That figure is “dangerously close” to the 1.5-degree Celsius limit advocated by scientists to stave off the worst impacts of climate change.

The six years since 2015, have been the warmest on record, and the decade beginning up to this year, was the warmest ever.

“We are on the verge of the abyss”, Secretary-General António Guterres said at a press conference announcing the findings.

The stark warning from WMO comes ahead of the virtual Leaders Summit on Climate this week, convened by United States President Joe Biden, to galvanize efforts to reduce greenhouse gas emissions and meet the targets of the historic 2015 Paris Agreement, agreed by all the nations of the world.

The UN chief underscored that 2021, “must be the year for action”, calling for a number of “concrete advances”, before countries gather in Glasgow in November, for COP26 – the 26th session of Conference of the Parties (COP26) to the UN Framework Convention on Climate Change (UNFCCC).

“Countries need to submit ambitious new nationally determined contributions (NDCs) that were designed by the Paris Agreement. Their climate plans for the next 10 years must be much more efficient.”

He also urged that climate commitments and plans must be backed with immediate action, and that the trillions of dollars invested by mostly richer nations for domestic COVID-19 recovery, be aligned with the Paris Agreement on climate change and the Sustainable Development Goals (SDGs), and that subsidies directed to fossil fuels be shifted to renewable energy.

“Developed countries must lead in phasing out coal – by 2030 in OECD countries, and 2040 elsewhere. No new coal power plants should be built”, Mr. Guterres stressed.

The State of the Global Climate report also noted how climate change undermines sustainable development efforts, through a cascading chain of interrelated events that can worsen existing inequalities, as well as raise the potential for feedback loops, perpetuating the deteriorating cycle of climate change.

Petteri Taalas, WMO Secretary-Secretary, cautioned that the “negative trend” in climate could continue for the coming decades independent of mitigation efforts, calling for greater investments in adaptation.

“The report shows that we have not time to waste. The climate is changing, and the impacts are already too costly for people and the planet. This is the year for action”, he said, calling for all countries to commit to zero emissions by 2050.

“One of the most powerful ways to adapt is to invest in early warning services and weather observing networks. Several less developed countries have major gaps in their observing systems and are lacking state-of-the-art weather, climate and water services”, he highlighted.

Amongst its findings, the 2020 WMO report noted that concentrations of the major greenhouse gases continued to increase in 2019 and 2020, with global average for carbon dioxide concentrations having already exceeded 410 parts per million (ppm), with a further warning that if the concentration follows the same pattern as in previous years, it could reach or exceed 414 ppm this year.

WMO also noted that ocean acidification and deoxygenation continued, impacting ecosystems, marine life and fisheries, as well as reducing its capacity to absorb CO2 from the atmosphere.

Furthermore, 2019 saw the highest ocean heat level on record, and the trend likely continued in 2020, as did the global mean sea-level rise. 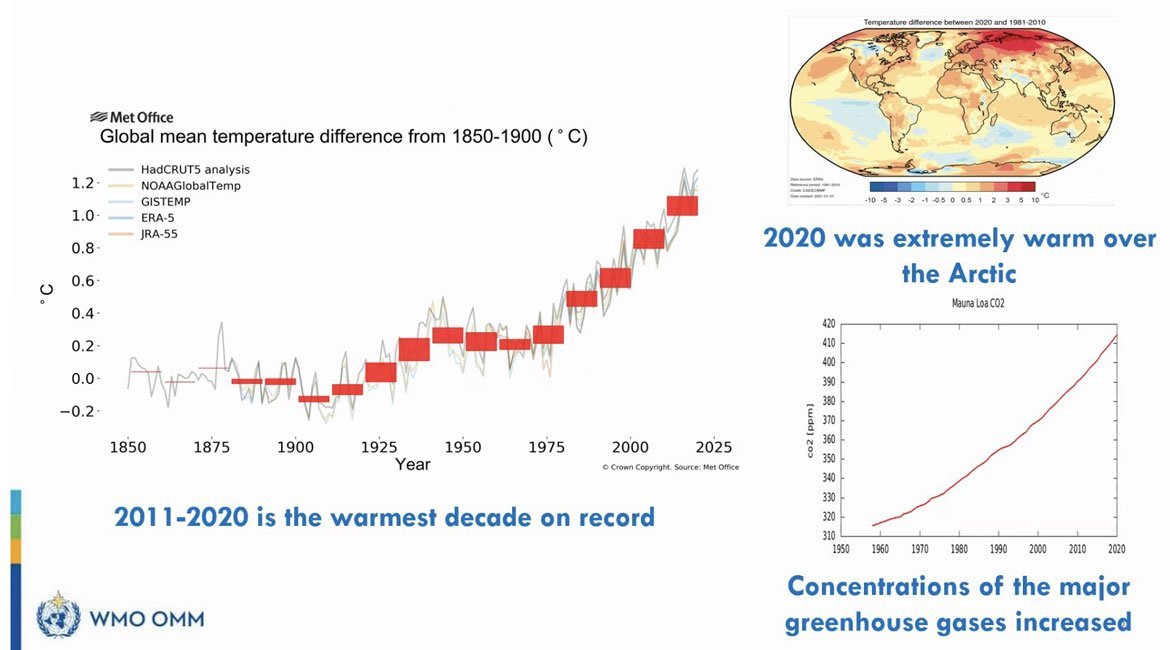 Source: WMO
State of the Global Climate in 2020

The report also said that the since the mid-1980s, Arctic air surface temperatures have warmed at least twice as fast as the global average, with “potentially large implications” not only for Arctic ecosystems but also for the global climate, such as thawing permafrost releasing methane, a potent greenhouse gas into the atmosphere.

In addition, record low Arctic sea-ice extent were observed in the months of July and October 2020, while the Greenland ice sheet lost approximately 152 gigatonnes of ice, between September 2019 and August 2020.

Extreme weather events were also recorded in several locations globally, with heavy rains and floods, severe and long-term droughts, disastrous storms, and widespread and prolonged wildfires, such as in the US and Australia.