Young activists, innovators, entrepreneurs and change-makers are due to gather at UN headquarters in New York at the Youth Climate Summit on Saturday 21 September to put pressure on global leaders to take action to prevent climate change.

Ms. Wickramanayake will be there, and UN News asked her why young people are so important to the climate action debate. 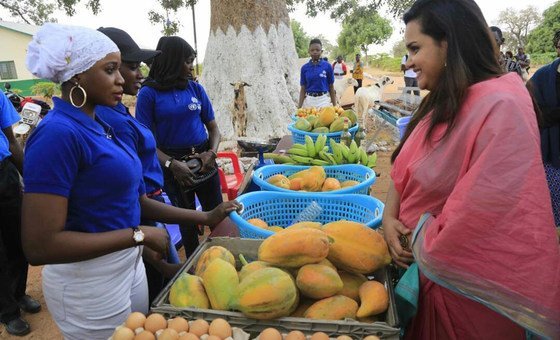 UN Secretary General’s Envoy on Youth, Jayathma Wickramanayake, speaking to some of the members of the 4th Batch of Trainees following their Graduation Ceremony in Chamen, Gambia. 5 February 2018. , by UNFPA Gambia/Alhagie Manka

Why is it necessary to bring young people together to discuss climate change?

There are 1.8 billion young people in the world today, that’s the largest number ever, so it is crucial that they have a say in the future of the planet, in their future. The school strike for climate action started by the young Swedish activist, Greta Thunberg, in her home town, Stockholm, and the other strikes by young people around the world which followed, have shown that they are demanding action on climate and want to have a decisive role in the decision-making process. The time to respond with action is now.

This Youth Climate Summit taking place at UN Headquarters will bring together the key leaders of the youth climate movement and provide a chance for them to engage with a wider global audience. Some 1000 young people from across the world will be attending the event in person and many more will be following online.

Is this an acknowledgement that those people in power, in other word adults, are not doing enough?

It is clear that tackling climate change needs to involve all people, young and old, privileged and underprivileged, from developed and developing countries. Young people want and deserve a role in what should be a participatory process and the school strikes for climate action were born out of their desire to make global leaders aware of and act on their concerns. Just as the 2030 Agenda for Sustainable Development underlines that young people are the torchbearers of sustainable development, they are also the thinkers, doers and innovators who can realise this agenda. They have a stake in the future as this is the planet, they will inherit; it is they who will bear the impact of a changing climate.

What do you think this youth summit can achieve?

The Summit is a platform for young leaders and youth-led organizations to showcase the actions they are taking to slow down climate change with the aim of keeping to a 1.5 degree Celsius increase in global temperatures above pre-industrial levels. In May, I launched the “Summer of Solutions” challenge to young people to create innovative technology-based climate solutions. These include developing a platform to enhance the access of localized climate and market information, developing tech tools to boost the “circular economy,” an economic system aimed at eliminating waste and the re-use of resources. The best ideas will be highlighted at the UN Secretary-General’s Climate Action Summit on 23 September.

The youth Summit will also feature a strong intergenerational component that will carry forward into the Climate Action Summit and which will allow youth activists from both the global south and north to question world political leaders about addressing climate change.

Providing young climate pioneers with an opportunity to engage with political leaders, including by asking bold and provocative questions, as well as proposing concrete solutions in a UN setting will be an important testament to fact that the voices of youth are being listened to. Beyond that, and more importantly, they are being responded to and they are influencing decision making at the highest levels. The youth summit is the United Nations Youth Strategy “Youth 2030” in action, where the first priority is engagement, participation and advocacy to amplify young peoples’ voices for the promotion of a peaceful, just and sustainable world.

What practical steps will come out of the interaction between youth and global leaders?

The Youth Climate Summit will prioritize meaningful engagement with leaders from national governments, the private sector and civil society. It is hoped that a large number of countries around the world will commit to consulting youth when formulating and designing climate action policies, plans and laws.

It is also expected that by facilitating these exchanges, corporate leaders will commit to working with, mentoring, as well as learning from, young entrepreneurs and/or youth-led companies, many of whom are in fact at the forefront of developing solutions to climate change. 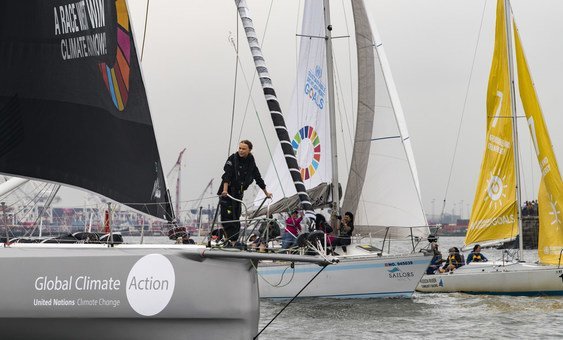 Greta Thunberg, the 16-year-old climate activist from Sweden, sailed into New York Harbor today flanked by a fleet of 17 sailboats representing each of the Sustainable Development Goals on their sails., by UN Photo/Mark Garten

A key voice at the youth summit will, no doubt, be Greta Thunberg. How important is she?

Young people think, feel and do things differently to older people and this is incredibly valuable as we face what the UN Secretary-General has called the “existential crisis” of climate change.

Greta Thunberg is an incredibly inspirational model for young people the world over and a powerful symbol of their desire to take action to prevent climate change. It is no small feat to get the attention of world leaders in the way she has done, so in this sense she is creating a powerful climate action movement led by the world’s young people, which cannot be ignored. I am also very proud of the youth activists from the global south, who might not be getting as much media attention; such as Venessa from Uganda and Timothy from Fiji and thousands more who are vocal advocates for our common future and are Greta’s biggest allies around the world.