This Thursday, the UN agency is closing down its social media channels for the next 18 hours to send one message to the world: #ReopenSchools for in-person learning as soon as possible.

The UN Educational, Scientific and Cultural Organization (UNESCO) is joining UNICEF, together with the World Bank, the European External Action Service (EEAS), the European Commission Humanitarian Aid operation, the LEGO Foundation and the WEF Global Shapers community of world youth.

The pandemic has taken so much from so many. For nearly 77M children, it has taken their classrooms for 18 months.

We're closing down our channels for the next 18 hours to send one message to the world: #ReopenSchools.

We’ll be back tomorrow. When will they be back in school?

For UNICEF, the right to go to school is central to every child’s development, safety and well-being. Yet in too many countries, classrooms remain closed while social gatherings continue to take place in restaurants, salons and gyms.

The agency believes “this generation of children and youth, cannot afford any more disruptions to their education.”

New numbers from UNESCO, released this Thursday, show that schools are now fully open in 117 countries, with 539 million students back in class, ranging from pre-primary to secondary levels.

This represents 35 per cent of the total student population across the world, compared to 16% who returned to school in September 2020, when schools were only open, or partially-open, in 94 countries.

Around 117 million students, representing 7.5 per cent of the total, are still affected by complete school closures in 18 countries. The number of countries with partly open schools, has declined from 52 to 41 over the same period.

In all countries that had prolonged full school closures, education was provided through a combination of online classes, printed modules, as well as tuition through TV and radio networks.

UNESCO and its Global Education Coalition partners have been advocating for the safe reopening of schools, urging full closures to be used as a measure of last resort.

Since the onset of the pandemic, schools were completely closed for an average of 18 weeks (4.5 months) worldwide. If partial closures are accounted for, the average duration of closures represents 34 weeks (8.5 months) worldwide, or nearly a full academic year.

For UNESCO, the past two academic years have resulted in learning losses and increased drop-out rates, impacting the most vulnerable students disproportionately.

Schools in most countries have adopted some forms of sanitation protocol such as wearing masks, using hand sanitizers, improving ventilation and social distancing, which were also key to re-opening schools last year.

Some countries have also introduced large scale testing as well as temporary classroom and school closures when the virus is detected. 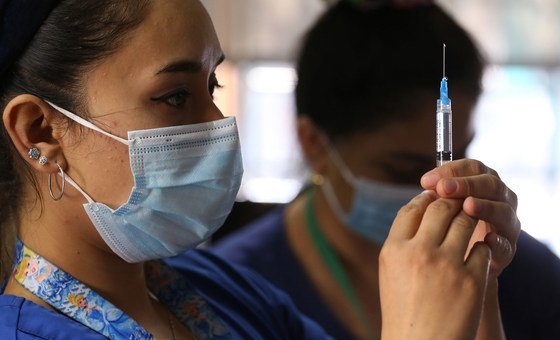 UNICEF and UNESVO say teachers should e prioritized to get the COVID-19 vaccination in order to ensure a safe return to schools, by © UNICEF/Elvis González

Rising vaccination rates among both general population and teaching staff, has also been a key factor in reopening schools.

The vaccination of teachers has been prioritized in around 80 countries, allowing for the inoculation of some 42 million teachers. In a handful of countries, the vaccination of students aged 12 and over, is an important factor in determining the full re-opening of schools.

Action to accelerate the recovery of learning losses remains an essential component of national COVID-19 education responses. For that, UNESCO says teachers and educators need adequate support and preparation.

For that reason, UNESCO, UNICEF and the World Bank have partnered in an initiative called Mission: Recovering Education 2021, that supports governments in bringing all learners back to school, run programmes to help them catch up on lost learning, and prepare teachers to address learning losses and incorporate new digital technology.