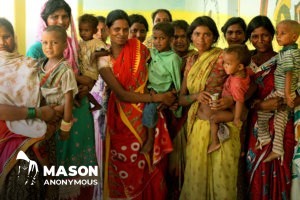 “The World Population Prospects 2019: Highlights”, estimates that the next 30 years will see the global population add an extra 2 billion people to today’s figure of 7.7 billion, and, by the end of the century, the planet will have to sustain around 11 billion.

The nine countries expected to show the biggest increase are India, Nigeria and Pakistan, followed by the Democratic Republic of the Congo, Ethiopia, Tanzania, Indonesia, Egypt and the United States of America. In all, the population of sub-Saharan Africa is expected to practically double by 2050.

However, growth in these countries comes against the backdrop of a slowing global fertility rate. In 1990, the average number of births per woman was 3.2. By 2019 this had fallen to 2.5 births per woman and, by 2050, this is projected to decline further to 2.2 births: a fertility level of 2.1 births per woman is necessary to avoid national population decline over the long run (in the absence of immigration).

The population size of more and more countries is actually falling. Since 2010, 27 countries or areas have seen a drop of at least one per cent, because of persistently low fertility rates. Between now and 2050, that is expected to expand to 55 countries which will see a population decrease of one per cent or more, and almost half of these will experience a drop of at least 10 per cent.

In some cases, the falling population size is reinforced by high rates of emigration, and migration flows have become a major reason for population change in certain regions. Bangladesh, Nepal and the Philippines are seeing the largest migratory outflows resulting from the demand for migrant workers; and Myanmar, Syria and Venezuela are the countries where the largest numbers are leaving because of violence, insecurity or armed conflict. For those countries where population is falling, immigration is expected to plug the gaps, particularly in Belarus, Estonia and Germany.

Population report a ‘roadmap to action and intervention’

“Many of the fastest growing populations are in the poorest countries, where population growth brings additional challenges”, said Liu Zhenmin, United Nations Under-Secretary-General for Economic and Social Affairs (DESA). These challenges include the fight to eradicate poverty, and combat hunger and malnutrition; greater equality; and improved healthcare and education. The report, he said, offers a “roadmap” indicating where to target action and interventions.

At the same time, growth is providing opportunities in many developing economies: recent reductions in fertility mean that the working-age population (25 to 64) is growing faster than other age ranges, which could improve the possibilities for faster economic growth. The report recommends that governments make use of this “demographic dividend” to invest in education in health.

UNICEF/Frank Dejongh
Boys taking a bath and having fun in a pond in Zinder, in the center of Niger. (1 June 2019)

There will be one in six people over 65 by 2050, up from the current figure of one in 11. Some regions will see the share of older people double in the next 30 years, including Northern Africa, Asia and Latin America.

By 2050, a quarter of the population in European and Northern America could be 65 or over. The higher proportion and number of older people is expected to put increased financial pressure on countries in the coming decades, with the higher cost of public health, pensions and social protections systems.

Although overall life expectancy will increase (from 64.2 years in 1990 to 77.1 years in 2050), life expectancy in poorer countries will continue to lag behind. Today, the average lifespan of a baby born in one of the least developed countries will be some 7 years shorter than one born in a developed country. The main reasons are high child and maternal mortality rates, violence, and the continuing impact of the HIV epidemic.

“The World Population Prospects 2019: Highlights”, is published by the Population Division of the UN Department of Economic and Social Affairs (DESA) and provides a comprehensive overview of global demographic patterns and prospects. The report is based on population estimates from 1950 to the present for 235 countries or areas, underpinned by analyses of historical demographic trends. The 2019 revision also includes population projections to the year 2100, that reflect a range of plausible outcomes at the global, regional and country levels.