Behind the scenes, however, a team of mediators, overseen by the UN’s political chief, Rosemary DiCarlo, is using quieter diplomacy in conflict zones across the world, to bring warring parties together and make the world a safer place.

Ms. DiCarlo, the Under-Secretary-General for Political and Peacebuilding Affairs, is one of the UN’s most senior official on matters of peace and security, and is often seen briefing members in the Security Council, delivering the UN’s analysis and recommendations  – in contrast to sometimes vocal national disagreements – concerning key conflict areas such as Syria and Yemen.

The role of the Under-Secretary-General and the Department of Political and Peacebuilding Affairs (DPPA) has changed, and grown, over the years and, today, it involves policy analysis, diplomatic efforts to prevent conflict from occurring in the first place, overseeing the peaceful conduct of elections, and the UN’s field-based political missions.

Mediators: the unsung heroes of peacebuilding 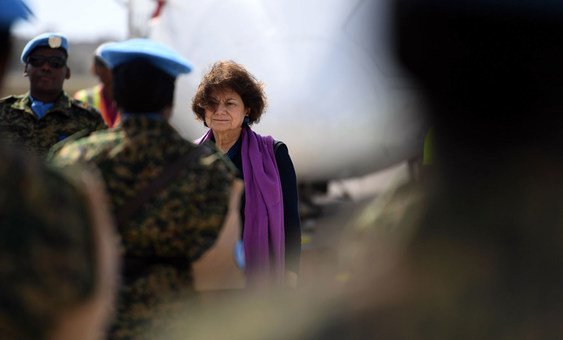 Mediation, however, has been a mainstay of the department, and remains crucial today. DPPA has a standby team of experienced mediators, who help warring parties come to the negotiating table, assist in inter-communal dialogue, provide advice on constitution drafting and security sector reform, and, broadly, deal with a range of issues often at the root of mounting conflicts.

They work in both mission and non-mission settings, including some very large operations such as Afghanistan and Iraq, where they work to help promote peace and reconciliation. And, because of the sensitive nature of their work, much of what they do is destined to remain in the shadows.

At the end of 2019, UN News interviewed Ms. DiCarlo at UN Headquarters in New York, and she shared some of her insights regarding the Organization’s evolving role in conflict prevention, and her hopes and fears for the future.
She started by explaining that the UN’s ability to act as an “honest broker”, including safeguarding the confidentiality of sensitive negotiations, is vitally important.

“First of all, we approach every situation from a very impartial perspective. We go into negotiations in an impartial way, and we don’t have a certain mindset of how something should end: we just want people to be able to decide for themselves how to move forward. And if we can help that through mediation, that’s what we do.

Our first priority is to build trust with our interlocutors, but also to ensure confidentiality. A lot of what we do is never written about, and certainly never disseminated, because our goal is the following: we want people to be able to come together and feel as if they have come to an agreement that will be lasting between them.

We’ve had a number of instances where we have been able to diffuse tensions surrounding elections, where a particular leader would like to extend his mandate, and we’ve managed to have discussions, and bring parties together. These are situations which are extremely difficult to overcome in many societies.

We send experienced diplomats, sometimes a former UN official, or a former high-level official from a Member State, to lead discussions on the way forward and to look at whether the parties can accept the results of an election or, in some cases, redo certain aspects of an election”.

Words from the wise: the former leaders helping the UN’s peace efforts

Members of the Secretary-General’s High-level Advisory Board on Mediation., by UN Photo/Loey Felipe

Since the beginning of his mandate in 2017, the current UN Secretary-General, António Guterres, has made mediation one of his key priorities and, in 2017, set up a High level Advisory Board on Mediation, made up of 18 members, all highly experienced in diplomacy and mediation.

The Board, says Ms. DiCarlo, has already made a tangible difference to the UN’s ability to resolve conflict, and has helped the Organization to include more diverse voices in the peacebuilding process.

They also provide us with guidance and wisdom from their past experiences, because many of them are former leaders of their countries, former foreign ministers or high-level officials who really have done a great deal in their own careers, and are now helping us to look at a situation and help mediate a conflict or prevent a conflict from arising.

The need for diverse voices 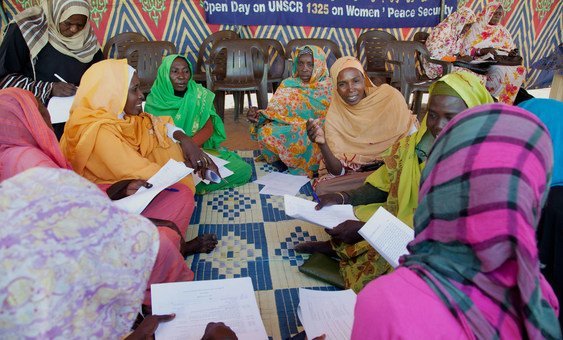 A workshop on women, peace and security in North Darfur. By UNAMID/Albert Gonzalez Farran

“We have worked with the advisory board a lot on the inclusion of women and youth in various political processes and, when our envoys in the field submit their periodic reporting to the Secretary-General and the Security Council, they include aspects related to women and youth in their analysis.

When we are the ones leading a particular peace process or negotiation, we are very clear that a certain percentage of the participants have to be women, and they should meaningfully participate. One example is the Syrian Constitutional Committee, where we are working very hard to ensure 30 per cent female participation amongst the 150 members.

We meet frequently with experts on given issues, and it’s been extremely useful to get diverse opinions from civil society groups dealing with issues such as women’s rights, refugees, displaced persons or other issues. We make it a practice to be sure to hear their voices when we’re in the field”. 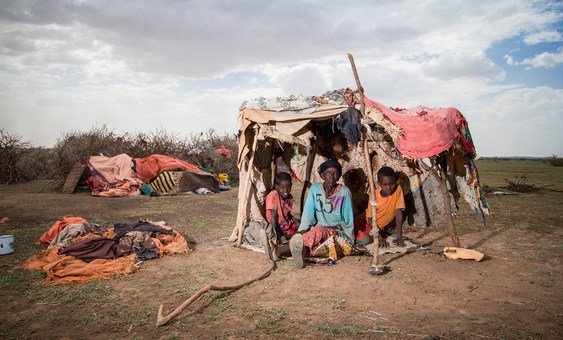 An internally displaced woman sits in a makeshift tent with her two grandchildren in the Wajaale district in Somalia. They were forced to move due to the severe drought. © UNHCR/Mustafa Saeed

In recent years, the conflict landscape has changed, with a growing involvement of non-State actors, which has had a significant impact on the activities of the DPPA. This is just one of many destabilizing factors, however, and one of the most significant is the changing climate which Ms. DiCarlo describes as a “threat multiplier”.

“We’ve seen this in Africa, for example, with farmers and herders fighting over land, the displacement of people that then leads to inter-communal tensions and, in some cases, inter-communal violence. And, whilst we seek to reap the benefits of innovation, we know that new technologies can also be destabilizing. So, there are many areas that we have to take into account.

There’s also the fact that we have to get up to speed on so many issues that traditionally weren’t really part of what a political department was dealing with, such as climate, innovation, or cyber-attacks. These are all areas that were new to us and, over the last few years, we’ve had to build up the understanding of these issues in order to be able to take steps and move forward with our work.

When it comes to climate change, for example, we have a small cell in our policy division which has been working with the UN Environment Programme (UNEP) and the UN Development Programme (UNDP) for about a year and a half, looking at the impact of climate change on security and ways to deal with communities that find themselves displaced because of climate change, and making very clear that this can, in many cases, be an early warning of something more serious, in terms of violence or conflict”.

Don’t let me be misunderstood 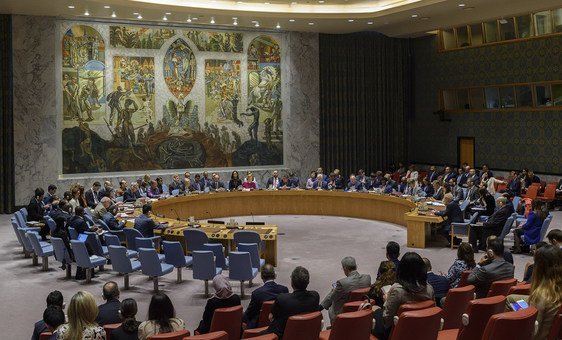 Although Ms. DiCarlo is confident that her department is adapting to the changing demands of global conflict, she is often frustrated by the lack of understanding of the important contribution DPPA makes to world peace:

“It can be very hard to listen to Member States or individuals questioning the merits of the United Nations, (for example, what does it do, what are they all doing there, sitting in meetings etc) when you know that you’ve had people in the field working very hard to bring sparring groups together.

I think there is a concern on the part of some members States and individuals that our actions could be perceived as interference in internal affairs, which is not at all what we are trying to do. First of all, we only go when we’re invited, when people seek our help. We offer our help, but we don’t force ourselves upon them”.

Beyond the misconceptions that some may have regarding her department, Ms. DiCarlo also worries that the consensus regarding the very principles on which the UN was founded, is not as strong as it was in earlier times:

“I think that there is a sense that what worked for us before, doesn’t work now. There was always, perhaps, a difference of views, but it was never manifested in quite the way it is manifested today. As the Secretary-General says, we went from a bi-polar to a uni-polar to a multipolar world, which is making things quite different and more complicated”.

Despite these fears, the UN’s political chief is determined that, by the end of her mandate, she is able to leave behind a department that has all the necessary tools for dealing with conflict prevention, and conflict resolution and has genuine support for the ideas the Secretary-General has put forward regarding conflict prevention, but also preventing climate change.

“The General Assembly”, she says “has already embraced the concept of sustaining peace and looking at the world through a sort of prevention lens, and I think that we have to do that in all of our activities, not just in my department, but across the UN”.

Who is Rosemary di Carlo?

Rosemary A. DiCarlo, a US citizen, was appointed Under-Secretary-General for Political Affairs in May 2018. In this role, she advises the Secretary-General on peace and security issues globally, while overseeing “good offices” initiatives and field-based political missions carrying out peacemaking, preventive diplomacy and peace-building activities in Africa, Europe, the Middle East, Central and Southeast Asia and the Americas. She also oversees the United Nations electoral assistance provided to dozens of its member states each year.

During her distinguished career with the United States Department of State, she served, among other functions, as Deputy Permanent Representative to the United Nations with the rank and status of Ambassador Extraordinary and Plenipotentiary.

Ms. Di Carlo also served as President of the National Committee on American Foreign Policy from August 2015 to May 2018, and was concurrently appointed a Senior Fellow and Lecturer at Yale University’s Jackson Institute for Global Affairs.

Ms. DiCarlo graduated from Brown University with a B.A., M.A. and Ph.D. in comparative literature, as well as Slavic languages and literature. She speaks French and Russian.