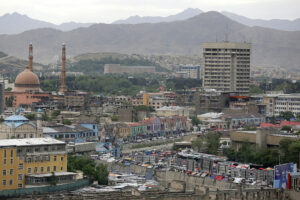 A note issued to the UN press corps said that Mr. Guterres is following with deep concern the rapidly evolving situation in Afghanistan, as the conflict is forcing hundreds of thousands to flee their homes. There continue to be reports of serious human rights abuses and violations in the communities most affected by the fighting, added the note.

Protect rights of women and girls

The Secretary-General is particularly concerned about the future of women and girls, whose hard-won rights must be protected, the note continued, stressing that “all abuses must stop. He calls on the Taliban and all other parties to ensure that international humanitarian law and the rights and freedoms of all people are respected and protected.”

The note goes on to say that the need for assistance is surging while the operating environment becomes more restricted due to the escalation of the conflict. As such, Mr. Guterres is calling on all parties to ensure that humanitarian actors have unimpeded access to deliver timely and life-saving services and assistance.

Despite immense challenges, humanitarian organizations in Afghanistan are committed to #StayAndDeliver aid and services to millions of people in need while adhering to the #humanitarianprinciples of humanity, neutrality, impartiality and independence. pic.twitter.com/B8CJ3z5T13

“The United Nations remains determined to contribute to a peaceful settlement, promote the human rights of all Afghans, notably women and girls, and provide life-saving humanitarian assistance and critical support to civilians in need,” concludes the note.

Speaking to reporters at UN Headquarters this past Friday, the Secretary-General stressed that there was still potential for stalled intra-Afghan talks taking place in Doha, Qatar, supported by the region and the wider international community, which could lead to a negotiated settlement.

On Monday, the Secretary-General will address the UN Security Council’s open meeting on Afghanistan.

According to latest reports, Taliban forces reached the Afghan capital, Kabul, earlier on Sunday. This followed the capture of one provincial capital after another over the past several weeks, ending with the key southern provinces of Kandahar and Helmond on Friday.

The insurgents now control more than two-thirds of the country, just weeks before the planned final withdrawal of US and international troops.

As widespread fighting intensified, meanwhile, thousands of Afghans fled their homes amid fears the Taliban would again impose a repressive government. The militant Islamist group ruled the country from the mid-1990s until the post 9/11 attacks US-led invasion, in late 2001.

Due to an escalation of fighting across the country, many people had been arriving in Kabul and other large cities, seeking safety from the conflict and other threats.

According to a flash update from the UN relief wing in earlier today, between 1 July and 15 August 2021, the humanitarian community verified 17,600 internally displaced persons (IDPs) who had arrived in Kabul. Arrival of new IDPs were not reported. Assessments were ongoing in the morning of 15 August.

Since yesterday, an additional 2,000 people were verified to be in need humanitarian assistance.

Noting that humanitarian partners have so far provided food, cash, household items, health and water and sanitation assistance to more than 13,500 IDPs, while more assistance is on the way, the UN relief wing, known as OCHA, said however that “inter-agency assessment teams did not operate on the afternoon of 15 August, due to uncertainty of the situation in Kabul.