A particularly sharp rise in casualties occurred in May when international military forces began withdrawing from the country and fighting intensified following the Taliban offensive to take territory from Government forces.

The UN Assistance Mission in Afghanistan (UNAMA) reported in its Afghanistan Protection of Civilians in Armed Conflict midyear update, that there were 1,659 civilians killed and 3,254 wounded; a 47 per cent increase compared with the same period last year.

UNAMA said it was particularly concerned about the acute rise in the number of civilian casualties in the period from 1 May, with almost as many recorded in the May-June period as in the entire preceding four months.

“I implore the Taliban and Afghan leaders to take heed of the conflict’s grim and chilling trajectory and its devastating impact on civilians,” said Deborah Lyons, the UN Secretary-General’s Special Representative for Afghanistan.

“The report provides a clear warning that unprecedented numbers of Afghan civilians will perish and be maimed this year if the increasing violence is not stemmed,” Ms. Lyons added in a statement accompanying the report.

Much of the fighting during the months of May and June took place outside cities, in areas with comparatively low population levels. UNAMA warned that without a significant de-escalation in violence, Afghanistan will likely witness the highest ever number of documented civilian casualties in a single year since it began keeping records in 2009.

The US-NATO withdrawal from Afghanistan is more than 95 per cent complete and is due to finish by 31 August. Ms. Lyons called on Taliban and Afghan leaders to intensify their efforts at the negotiating table: “Stop the Afghan against Afghan fighting. Protect the Afghan people and give them hope for a better future,” she said.

The UNAMA report noted that this is the first time that it has not attributed a single civilian casualty to international military forces. It stated that the conflict has now apparently become an exclusively civilian fight.

“Anti-government elements” were responsible for 64 per cent of the total casualties, of which 39 per cent were attributed to the Taliban, nearly nine per cent to Islamic State-Khorasan Province (ISIL-KP), and 16 per cent to undetermined non-state actors.

Pro-Government Forces (PGFs) were responsible for 25 per cent of civilian casualties: 23 per cent by Afghan national security forces, and two per cent by pro-Government armed groups or undetermined PGFs.

Eleven per cent of all civilian casualties were attributed to “crossfire” during ground engagements where the exact party responsible could not be determined, and other incident types, including unattributable unexploded ordnance/explosive remnants of war. 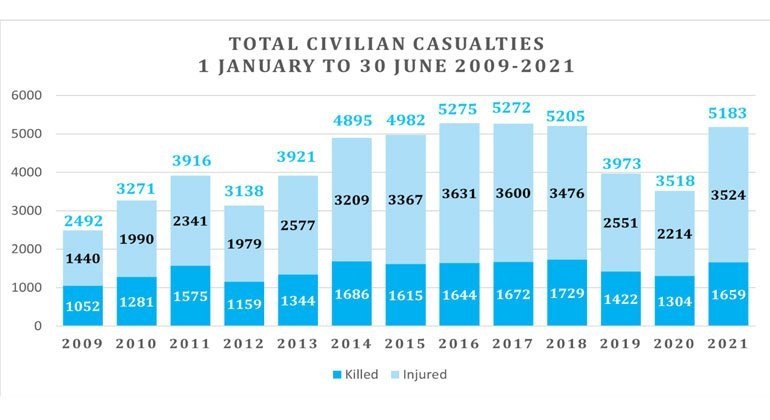 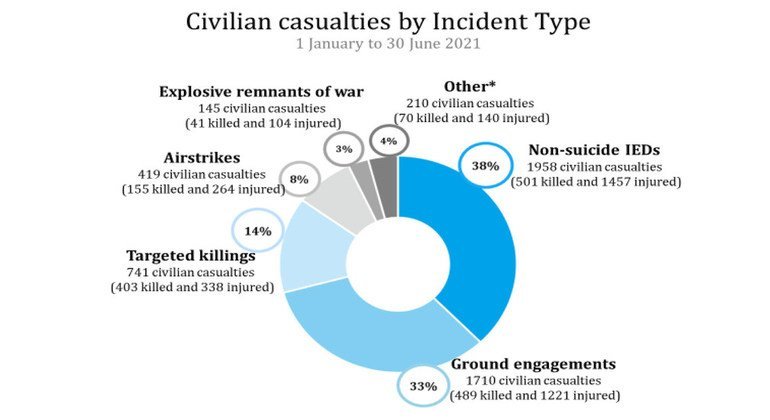 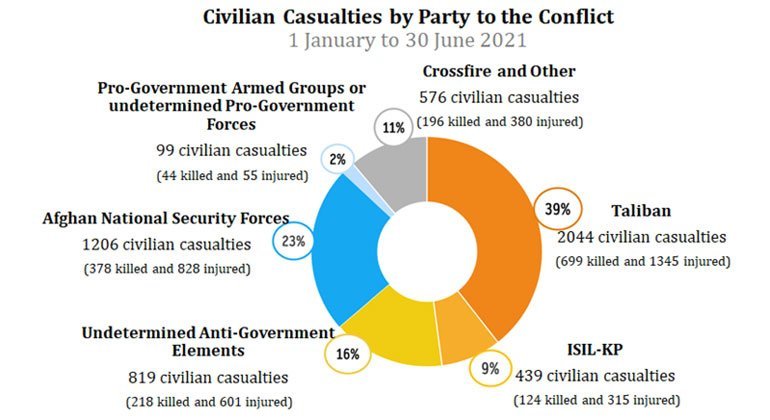 The leading causes of civilian casualties in the first half of 2021 were the extensive use of improvised explosive devices (IEDs) by opposition forces, ground engagements between parties, targeted killings by non-state groups and airstrikes by the Afghan Air Force.

Children, it stated, were deliberately targeted on at least one occasion. The most shocking incident was the 8 May attack outside the Sayed ul-Shuhuda school in Kabul, which resulted in more than 300 civilian casualties, mostly schoolgirls, including 85 killed, for which no group has claimed responsibility.

UNAMA also recorded a resurgence of deliberate sectarian-motivated attacks against the Shi’a Muslim religious minority, most of whom also belong to the Hazara ethnic group, nearly all claimed by the Islamist extremist group ISIL-KP.

The UN mission said it was also concerned about the increasing number of reports of killing, ill-treatment, persecution and discrimination in communities affected by the fighting and its aftermath. It warned that all parties to respect the human rights and dignity of people and prevent such abuses and violations.