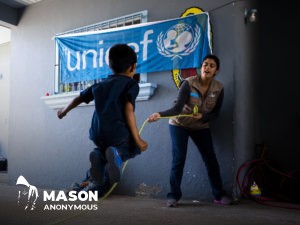 “The heart-rending photo published just yesterday showing the lifeless bodies of Salvadoran toddler Valeria and her father Oscar on the bank of the Rio Grande is a stark reminder of the perils facing migrants trying to reach the US,” said Henrietta Fore. “It is a searing image that should shake each of us to our core.”

In a strongly worded appeal to countries of origin, transit and destination to do more to protect vulnerable migrants, the UNICEF Executive Director spotlighted in particular the “dire” Government border shelter facilities on the US-Mexico border.

These centres cause lasting harm to youngsters in need of help, Ms. Fore said.

© UNICEF/Balam-ha Carrillo
In Tijuana, Mexico, UNICEF Executive Director Henrietta Fore meets with a young mother and her child who fled their home town in Mexico after facing extortion threats. (June 2019)

“Recent reports coming from some of these facilities are grim”, she insisted. “Children should not be in unsafe environments that can cause toxic stress and irreparable harm to their health and development.”

In comments that followed Tuesday’s resignation of the acting head of the US border protection agency, amid reports that migrant children lacked basic necessities, including soap and toothbrushes, at a centre in Texas, the UNICEF top official added: “It’s hard to fathom this happening in a country with such a rich history as a champion for children in need around the world, particularly for those uprooted from their homes and communities by crisis.”

Gang violence and poverty made us flee, say detainees in Mexico

Describing her encounter this week with Central American migrant families at a migrant shelter in Tijuana, Mexico, Ms. Fore explained that some youngsters had already been traumatized either in their home country or en route to the US border.

“None wanted to leave their countries, but all felt they had no choice because of the threat of gang violence or oppressive poverty…This is a dire situation requiring urgent action and funding to provide children and families with essential services and support.”

While UNICEF is working to give migrant children better access to protection, education and other services “wherever they may be in the region”, Ms. Fore urged national authorities to follow suit, to ensure their rights, protection, wellbeing and dignity.

“No one country can do it alone,” she urged. “Addressing the root causes of forced migration and the needs of uprooted children require serious commitment, resolve and resources.”

Commenting on the tragic father-daughter deaths in the Rio Grande,  the President of the General Assembly, María Fernanda Espinosa, said “we cannot have more people die because they decide to migrate.”

Talking to reporters in New York, Espinosa said, “that’s precisely why member states came together and crafted the Global Compact on Migration. That is precisely why we have a very strong international framework on human rights. It so happens that people on the move are human beings, and as such they are entitled to have their fundamental rights respected.”

If the 2030 Sustainable Development Goals are reached, “it would be the biggest service and the biggest preventive strategy to dangerous and unsafe migration”, she said, noting that the Compact, formally endorsed by the General Assembly last December, establishes “a framework for orderly, safe, and regular migration.”

Turning to the situation of Venezuelan migrants in Colombia and other countries in the region, Espinosa said this was a “symptom of the crisis” and stressed “the only outlet for Venezuela is a true negotiation with all parties involved.”