Presenting the Office’s (OHCHR) Annual Appeal, the High Commissioner said that “amidst a period of massive global upheaval and crisis, this funding will be critical to protect, promote and uphold human rights in every corner of the world.”

For Ms. Bachelet, “no matter how free individuals are to speak out and protest, they are not truly free if they lack food, education or adequate housing.”

Today, we call for US$400.5 million to carry out our human rights work in 2022. Amidst a period of massive global upheaval and crisis, this funding will be critical to protect, promote and uphold human rights in every corner of the world – @mbachelet.
👉https://t.co/NPCvebUEbH pic.twitter.com/OEwSGngeSG

Because of that, she assured, “the protection and promotion of economic, cultural and social rights will continue to be another core focus” of OHCHR’s work.

As the world enters the third year of the COVID-19 pandemic, she said her Office is also committed to combat the inequalities laid bare by the crisis, and to support disadvantaged groups who have been disproportionately affected.

The High Commissioner then explained how the funds would be used, including by supporting the UN Secretary-General’s vision of a “renewed social contract anchored in human rights,” as outlined in his landmark report “Our Common Agenda”.

The money would also strengthen efforts to embed human rights at the heart of COVID-19 response and recovery, and to continue advocating for equal access to vaccines.

OHCHR also plans on strengthening its focus to highlight the rights of people of African descent, as detailed in the Agenda Towards Transformative Change for Racial Justice and Equality

“Reversing systemic racism and strengthening accountability for law enforcement officials involved in the deaths of people of African descent, will be at the core of this work”, the Human Rights chief said.

With a presence in 103 countries, the High Commissioner assured that her Office will continue to work tirelessly to strengthen, promote and protect human rights all around the world.

She then highlighted a selection of improvements which full funding would help to support.

In the Americas, OHCHR will strengthen its capacity in Peru, Haiti and the English-speaking Caribbean, as well monitoring the situation of the more than six million Venezuelan migrants and refugees.

In Africa, they will open a new office in Burkina Faso and continue to promote human rights in Chad as part of the Government’s roadmap and National Inclusive Dialogue. 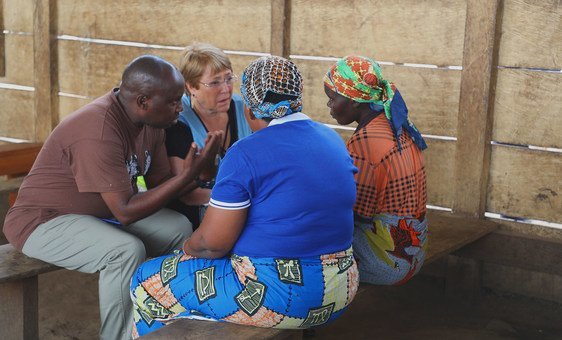 Throughout the Sahel region, where temperatures are rising 1.5 times faster than the global average, they will expand efforts to address the enormous human rights challenges, with a focus on the right to food.

In Central Asia, they will combat rising racial discrimination with increased digital outreach work, and two International Human Rights Advisors will be deployed to Kazakhstan and Tajikistan.

In Iraq, where OHCHR has trained some 200 human rights defenders, bloggers and journalists, they will expand cyberspace protection efforts and work to offer more protection for journalists at risk.

In Syria, they will continue to engage on the issue of the 100,000-plus people who remain missing or detained through more than a decade of civil war.

And in Ethiopia and Fiji, OHCHR plans to establish two more emergency response teams, in addition to the six already stationed around the globe.

As Ms. Bachelet explained, her Office relies heavily on voluntary contributions, which last year represented around 62 per cent of the overall budget.

According to Ms. Bachelet, these funds were “insufficient”, given the additional needs that crises such as COVID-19 and protracted conflicts have exposed.