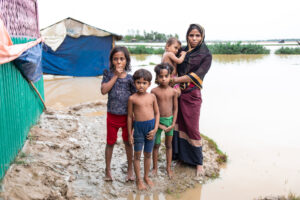 While initial reports revealed that an estimated 2,500 shelters were damaged or destroyed – affecting more than 12,000 refugees, in the last 24 hours alone, the Office of the UN High Commissioner for Refugees (UNHCR) said that nearly a foot of rain fell on camps hosting more than 800,000 Rohingya refugees.

“That’s nearly half the monthly rainfall average for July in one day”, pointed out the UN agency.

Since August 2017, some 700,000 minority Muslim Rohingyas have fled violence in Myanma, crossing the border into Bangaldesh’s Cox’s Bazar, joining hundreds of thousands of others already settled in overcrowded camps there.

News media report that at least 11 people have died, and thousands are homeless again.

And with the monsoon season stretching over the next three months, UNHCR warned that more heavy downpours are expected, threatening further casualties.

The impacts of the monsoon are compounded by the COVID-19 pandemic, UNHCR noted, reminding that currently the entire country is under a lockdown in response to rising cases across the nation.

UNHCR is supporting the Government-led response by deploying its network of Emergency Response Teams to provide immediate support and assistance to affected families and to those forced to temporarily relocate.

Teams are also assessing the damage and initiating immediate repairs to shelters as well as making site improvements.

Gaining access to essential services for all those affected is another priority, according to the UN refugee agency.

UNHCR-trained refugee volunteers and other partners are working in heavy rain, day and night to help families in urgent need.

In some cases, this has meant rescuing the displaced from shelters destroyed by landslides.

So far, more than 5,000 refugees have temporarily relocated to other family member’s shelters or communal facilities.

Adverse weather along with the latest landslides and floods have further aggravated the misery and immense humanitarian needs of the refugees who have suffered for years from disease, heavy rains and fires, including a massive blaze in March that killed at least 15 people and left tens of thousands homeless.

And yet to date, the 2021 Joint Response Plan (JRP) for the Rohingya humanitarian crisis in Bangladesh has received only $274 million, roughly 30 per cent of the $943 million required for the response this year.

UNICEF/ Rashad Wajahat Lateef
A child rummages through debris after a massive fire devastated the Balukhali area of the Rohingya refugee camps in Cox’s Bazar.