GBV includes acts that inflict physical, sexual or mental harm – or other forms of suffering, coercion and limits on personal freedoms – and has “long-term consequences on the sexual, physical and psychological health of survivors”, according to the UN’s sexual and reproductive health agency (UNFPA).

These are being driven increasingly by conflict, climate change, famine and insecurity, heightening vulnerabilities for girls and women.

UNFPA Executive Director Natalia Kanem told the meeting on Localizing GBV in humanitarian crises, that peace, justice and dignity are the “birthright of every woman and girl”.

She spoke of the agency’s “clear and ambitious” 2021-2025 Roadmap, which reflects a shared vision and underscored the need to create new pathways to ensure those rights.

Emphasizing the need for accountability “to ourselves and each other”, Ms. Kanem said that as the lead UN agency on the issue, “UNFPA is committed to standing strong”.

She said there was a strong will to act, “to do something about gender-based violence”, she added, stressing the importance of putting the voices of women “at the heart of what we do”

Ms. Kanem pledged to funnel 43 per cent of UNFPA’s humanitarian funding to national and local women’s organizations, saying “now more than ever, they need us”.

Emergency Relief Coordinator Martin Griffiths called the situation in Afghanistan “an important reminder of the primary vulnerability of women and girls in crises”.

He highlighted the vital role of women-led local communities, pointing out that they act as first responders to crisis.

Recalling a recent trip to Ethiopia, where he heard first-hand accounts of the traumas suffered by women in Tigray, he said that it was the local communities who first responded to the atrocities, which underscores the “absolute importance” of listening to women, protecting women and girls, and “protecting local communities to do what they naturally want to do”.

The protection of women is one of the least-funded parts of the humanitarian programme, Mr. Griffiths said.

Getting the word out

Henrietta Fore, Executive Director of the UN Children’s Fund (UNICEF), said to deliver on “the ambitious call to action”, it is important to “get the word out” to the girls and women on the ground about the services available. 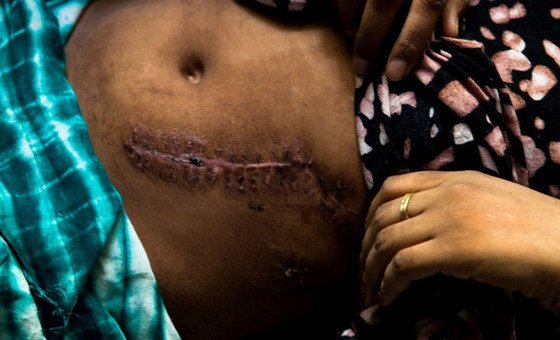 “This has not been clear at all”, Ms. Fore stated.

She spoke of the UNICEF report We Must Do Better, which provides a global feminist assessment of the experiences of women and girls, and the organizations they lead, during the COVID-19 pandemic.

The report highlighted that the needs of women and girls are either ignored or treated as an afterthought; and that despite being on the front lines of humanitarian crises, women are not taken seriously enough.

And although the demand for GBV services has increased during COVID, the resources have not, said Ms. Fore, calling for greater support for local women’s groups, including financially.

Fighting GBV is an important priority for the UN refugee agency (UNHCR), High Commissioner Filippo Grandi assured participants, especially in situations of forced displacements, which are “rife” with opportunities.

He acknowledged that during humanitarian crises as everyone is moving quickly, too often the critical role of local women’s organizations are overlooked.

The top UNHCR official said that providing “substantive, flexible, direct and rapid” resources to women-led, community-based organizations without undue red tape is “one of the most important” ways to empower them.

He conceded however, “this is a difficult call” as humanitarian funding is follow the trend of being “bureaucratized”.

Click here to watch the the meeting in its entirety.