On Tuesday, Rupert Colville, a spokesperson for the UN Human Rights Office, OHCHR, expressed concern that in the Americas, infections are spreading rapidly amid chronic overcrowding and unhygienic conditions, coupled with the lack of proper access to healthcare.

Mr. Colville cited a violent prison revolt in Venezuela over the weekend that reportedly resulted in 47 inmates losing their lives, and a prison riot on 27 April in Peru, that left nine inmates dead, calling on governments to strengthen measures to prevent violence in detention facilities, and avoid excessive violence by authorities, in supressing riots and regaining control. 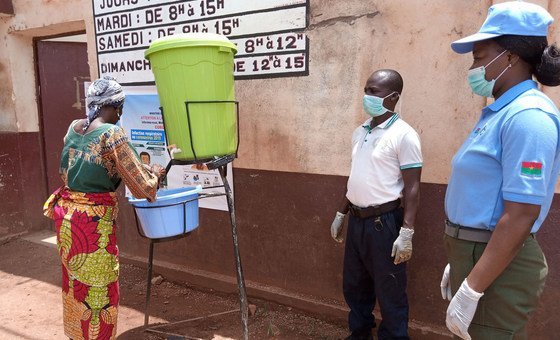 A handwashing facility outside Ngaragba Prison in Bangui, CAR during COVID-19 pandemic., by MINUSCA

Countries where UN Peacekeeping plays a vital role in areas such as prison management and administration, are also reporting difficult situations, linked to the pandemic. On Tuesday, UN Peacekeeping reported an outbreak of COVID-19 in Camp Kokolo, a military prison in Kinshasa, the capital of the Democratic Republic of Congo. It is believed that more than 100 detainees could be infected, although numbers are still to be confirmed.

In countries such as DRC, prisons are frequently characterised by overcrowding, cramped conditions, malnutrition, poor hygiene, inadequate sanitation and limited access to health care. In addition to human rights and humanitarian concerns, situations such as the COVID-19 pandemic, heighten the risk of riots and breakouts, and endangering public health and security.

UN corrections officers support national authorities in areas such as staff safety, prison and preventative security, as well as protecting the basic human rights of prisoners and promoting faith in legal systems. Ensuring an adequate response to COVID-19 in places of detention has been a particular area of concern, leading to the UN Office of Rule of Law and Security Institutions (OROLSI, part of the Department of Peacekeeping Operations), to prepare guidance and operational tools to help slow the spread of the virus.

In Camp Kokolo, UN personnel and partners are responding to the outbreak by providing personal protection equipment to staff and prisoners, mobile isolation units and carrying out testing in an attempt to track the virus through the prison population.

In the Democratic Republic of the Congo (DRC), prison congestion is particularly acute: OROLSI estimates that capacity on average is being exceeded three fold, which poses several challenges, including poor living and working conditions, and overstretched resources in terms of security, personnel, healthcare, sanitation and budget. It is also a fertile breeding ground for diseases, including the new coronavirus.

Patience Sai, a Senior Corrections Officer with the UN Mission in DRC (MONUSCO), told UN News that UN corrections personnel are working in prisons to support national authorities, in circumstances where they are placing their own safety, and health, at risk.

“Being frontline officers, they come in direct contact on daily basis with prison staff and inmates and, given the lack of adequate preventive resources, and the inability to physical distance due to prisoner overcrowding, there is a high risk of contamination, if COVID-19 gets into the prison.” Protection measures for these officers, she explained, include reducing the frequency of prison visits and the amount of contact with inmates. 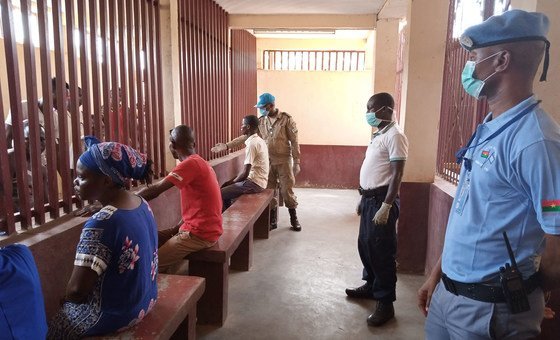 Visiting time at Ngaragba Prison in Bangui, CAR during COVID-19 pandemic., by MINUSCA

As for the problem of decongestion, the UN Mission is working closely with the Congolese authorities to secure the early release of more prisoners. So far, some 2,000 prisoners have been released nationwide, out of a total prison population of around 40,000 (although this does not include detained minors, who do not have the same status as adult prisoners).

This is in line with UN Peacekeeping’s guidance on early prisoner release, as part of measures to limit the spread of COVID-19 in Mission, and other fragile settings. These guidelines recommend the responsible early release of low risk, vulnerable detainees (such as first-time offenders, and those convicted of non-violent crimes); limiting arrests to those who pose a risk to society; and increasing the use of amnesties and pardons.

For serious cases that must go ahead, for example those punishable by life sentences (for example, alleged acts of murder, rape or crimes against humanity), some countries are looking into the idea of holding remote, online hearings, where judges and prosecutors can work from home, to minimise the risk of infection.

Keeping the peace in CAR

The prison system in the Central African Republic (CAR) faces many of the same problems as those in DRC, including overcrowding and disturbances. The UN Mission in CAR, MINUSCA, provides 108 Government Provided Corrections Personnel (GPP) to help prisons cope with a variety of incidents.

Ngaragba Prison, in the capital, Bangui, is the main facility in the country, and houses 909 detainees, despite an official capacity of 260. Over-crowded, under-funded, and ill-staffed prisons such as Ngaraga are ripe for riots, assaults, escapes and the spread of contagious disease, such as COVID-19. As in DRC, MINUSCA corrections officers are on the front-line in the face of prison security issues and, now, the COVID-19 pandemic.

Ingrid Jeunhomme, Chief of MINUSCA’s Corrections Component, says that, despite the increased risks posed by the virus, her officers are continuing to face up to the challenge: “The COVID-19 crisis and the risk of it spreading into prisons is an extra burden, work-wise but also psychologically. I am very proud of my staff who, rather than staying safe at home, continue to carry out their duties. They are part of the invisible heroes of peacekeeping.”

Luc Zina, a UN corrections officer at Ngaragba prison, admits that the threat of COVID-19 is worrying, but he is aware of the importance of his work: “our presence in prisons is necessary for the maintenance of order and security and, therefore, peace in the Central African Republic.

“For example, in February, we had to manage tension in the prisons, and its annex Camp de Roux, which houses high-risk prisoners, because of persistent rumors that it would be attacked by armed groups trying to free some of their leaders, who are held here.”

“Our presence is also essential in preventing COVID-19 from spreading. We make sure that preventative measures are put in place, such as awareness-raising for prisoners and staff, educating them about practices such as social distancing, and  quarantining for new admissions.” 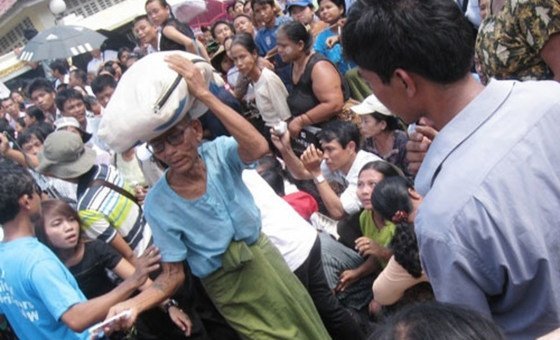 An elderly man and former prisoner in Myanmar is released from Yangon’s Insein prison (file photo), by IRIN/Lynn Maung

In Myanmar, the UN is trying to slow the spread of the pandemic by helping to improve prison hygiene. This has resulted in relatively few cases of COVID-19, and UN agencies and other entities, have been working to prepare prisons to cope with an expected rise in cases. This has involved the purchase of infection control supplies (including masks, hand sanitizer and personal protective equipment), in support of the UN’s work in prison settings.

On 17 April, Ola Almgren, the UN Resident Coordinator (the highest-ranked development representative) in the country, welcomed the Government’s pardon and release of some 25,000 people, as well as ongoing efforts to strengthen sanitary procedures in prisons and detention facilities.

UN personnel in the country, backed by the Joint United Nations Programme on HIV/AIDS (UNAIDS), are also helping to improve access to information, and vital health services for those with drug use disorders, and for people living with HIV and tuberculosis, in collaboration with the authorities and NGOs.

The worsening conditions in many prisons, in both developed and developing, as a result of the pandemic, is no surprise to the UN. Back in March, UN human rights chief Michelle Bachelet urged governments not to forget those behind bars.

Ms. Bachelet warned of the “potentially catastrophic” consequences of neglecting detainees, and called on governments to work quickly to reduce the number of people in detention.