It’s a year since the innovative scheme was born, in a bid to guarantee timely access to everyone, regardless of their income, status or location, to life-saving jabs, as the pandemic gripped the world.

“Yet, the global picture of access to COVID-19 vaccines is unacceptable”, said the statement released on Wednesday.

“In the critical months during which COVAX was created, signed on participants, pooled demand, and raised enough money to make advance purchases of vaccines, much of the early global supply had already been bought by wealthy nations.”

COVID-19 vaccines delivered through the COVAX Facility arrive in Tanzania. , by UNICEF/Daniel Msirikale

But today, the statement continues, “COVAX’s ability to protect the most vulnerable people in the world continues to be hampered by export bans, the prioritisation of bilateral deals by manufacturers and countries, ongoing challenges in scaling up production by some key producers, and delays in filing for regulatory approval.”

With widespread support, COVAX secured financing, dealt directly with vaccine developers and manufacturers worldwide, and addressed a host of operational challenges, to organise the most complex vaccine rollout in human history.

“COVAX has already achieved significant progress: more than $10 billion has been raised; legally-binding commitments for up to 4.5 billion doses of vaccine; 240 million doses have been delivered to 139 countries in just six months”, said the statement.

But according to its latest Supply Forecast, COVAX expects to have access to around 1.425 billion doses of vaccine in 2021, “in the most likely scenario and in the absence of urgent action by producers and high-coverage countries to prioritize COVAX”, the World Health Organisation (WHO), UN Children’s Fund (UNICEF), CEPI, GAVI and other partners behind the initiative said.

Of these doses, approximately 1.2 billion will be available for the lower income economies participating in the so-called COVAX Advance Market Commitment (AMC).

This is enough to provide protection for 20% of the population, or 40% of all adults, in all 92 AMC economies, with the exception of India.

Over 200 million doses will be allocated to self-financing participants. The key COVAX milestone of two billion doses released for delivery is now expected to be reached in the first quarter of 2022, says the statement.

COVAX and its partners are calling on donors and manufacturers to recommit their support, and “prevent further delays to equitable access”, by ensuring that the following basic steps take place:

“As the COVID-19 pandemic continues to claim lives, destroy livelihoods and stunt economic recovery, we continue to emphasise that no one is safe until everyone is safe”, said COVAX. 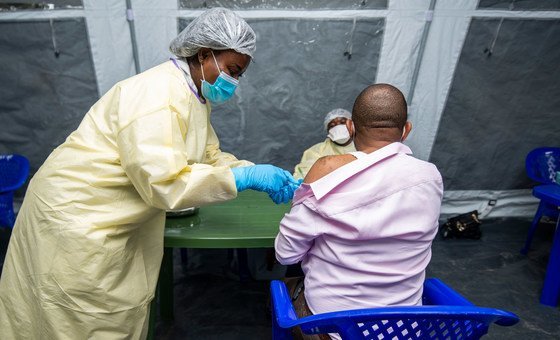 A vaccination campaign against COVID-19 is launched in Goma, Democratic Republic of the Congo, with the vaccines received through the COVAX initiative., by © UNICEF/Ariette Bashizi

“There is only one way to end the pandemic and prevent the emergence of new and stubborn variants and that is by working together.”

‘Now is the time for true leadership, not empty promises’

In a news briefing in Geneva, WHO chief, Tedros Adhanom Ghebreyesus, reminded journalists of his call, a month ago, for a global moratorium on booster doses, at least until the end of September, in order to prioritise the vaccination of the most at-risk people around the world who are yet to receive their first dose.

“There has been little change in the global situation since then, so today I am calling for an extension of the moratorium until at least the end of the year, to enable every country to vaccinate at least 40 percent of its population,” he explained.

For Tedros, the world’s largest producers, consumers and donors of vaccines in the world’s 20 leading economies hold the key to vaccine equity and ending the pandemic. “Now is the time for true leadership, not empty promises,” he said.