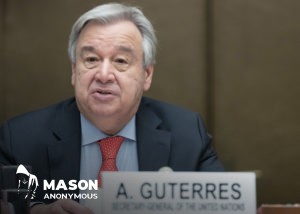 I condemn the continuing launching of rockets from #Gaza. Enough #Palestinian and #Israeli lives have been lost, people injured, houses damaged and destroyed! It is time to de-escalate and return to the understandings of the past few months before it is too late. #UN

According to news reports, several women, children and men on both have been killed and injured as a result of the violence.

Deploring the “risk of yet another dangerous escalation and further loss of life on the eve of the holy month of Ramadan,” on Sunday, the UN chief condemned “in the strongest terms the launching of rockets from Gaza into Israel, particularly the targeting of civilian population centres”.

He urged all parties to “exercise maximum restraint, immediately de-escalate and return to the understandings of the past few months,” referring to a fragile Egypt-brokered and UN-backed cease fire recently agreed upon.

The UN’s Special Coordinator for this conflict’s peace process, Nickolay Mladenov, issued a similar call for calm on Saturday and continues to work closely with Egypt and all concerned parties to restore calm.

Against a backdrop of longstanding shortages of basic goods and services in Gaza linked to a more than decade-long air, sea and land blockade by Israel, Palestinian protests began over a year ago in the Strip. In an ongoing cycle of violence, in over a year, close to 200 Palestinians have been killed, including more than 40 children and over 1,300 have been injured.