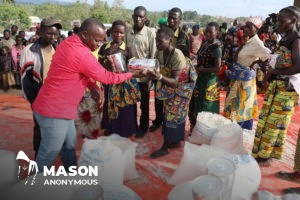 In addition to worsening hunger, communities in north-east DRC face a deadly Ebola outbreak and inter-ethnic clashes that claimed at least 117 lives between 10 and 13 June, according to a recent report by the UN human rights office, OHCHR.

In #Ebola-afflicted Ituri province #DRC, violence is flaring. WFP intends to triple, to 300,000 the number of internally displaced people it supports with food & cash

Announcing the aid scale-up operation on Tuesday, WFP spokesperson Hervé Verhoosel warned that “people are dying of hunger, or, malnutrition is such that they are dying”.

He added that although there is no accurate data on the total number of deaths from hunger in Ituri, 13 million people are food insecure nationally, including five million acutely malnourished children.

The situation has worsened because of an increase in clashes between Hema herders and Lendu farmers that have driven people from their homes, along with rising food prices; a lack of income and access to a varied diet; and crop damage due to insects; and disease epidemics.

Addressing the rising violence, Mr. Verhoosel said: “This senseless cruelty comes right at harvest time, where the newly displaced have had to flee their homes in rural villages with very little or nothing”. He added that “many victims of this increase in violence are malnourished and have been forced to move numerous times…they are seeking security in urban centres and in the bush.”

According to the UN refugee agency, UNHCR, inter-ethnic violence has led to the mass displacement of 300,000 people since June, while some 7,500 people have crossed into neighbouring Uganda from DRC, across Lake Albert.

Together with North Kivu province, people in Ituri are also living through the DRC’s worst recorded Ebola virus outbreak, which WFP is helping to contain by providing assistance to people infected by the often fatal disease and their families and friends, in a bid to prevent at-risk populations from making unnecessary journeys.

In its latest Ebola update, the UN and authorities reported that since the outbreak began on 1 August 2018, 2,338 people have been infected with Ebola, including 2,244 confirmed and 94 probable cases.

To help 5.2 million people across DRC for the next six months, the UN food agency said that it needs $155 million, including $35 million to respond directly to Ebola.