“Today, only one in three science and engineering researchers in the world is a woman”, stated Secretary-General António Guterres, explaining that “structural and societal barriers” are preventing women and girls from “entering and advancing in science”.

"Recognize, applaud, publish and cheer on the brave women who have constantly advocated and promoted equitable, gender-focused & just #ClimateAction measures."

We need more #WomenInScience like @poshgero, Founder and CEO of @AccessDrop.

A significant gender gap has persisted at all levels of science, technology, engineering and mathematics (STEM) disciplines around the world.

Even though women have made tremendous progress towards increasing their participation in higher education, they are still under-represented in these fields.

And from school closures to a rise in violence and greater homecare burdens, the COVID-19 pandemic has simply increased gender inequalities.

“This inequality is depriving our world of enormous untapped talent and innovation”, he continued, underscoring the need for women’s perspectives “to make sure that science and technology work for everyone”.

He called for policies that “fill classrooms” with girls studying technology, physics, engineering, and maths; and targeted measures to ensure that women are afforded opportunities to “grow and lead at laboratories, research institutions and universities”.

Mr. Guterres also stressed that determination was needed to end discrimination and stereotypes about women in science along with more rigorous efforts to expand prospects for minority women.

All of this is especially important in the crucial field of artificial intelligence (AI) – a wide-ranging branch of computer science that is present in everyday life, from booking flights and applying for loans to screening for cancer.

“There is a direct connection between low levels of women working in AI, and absurd gender biased algorithms that treat men as standard and women as an exception”, said Mr. Guterres.

“We need more women developing artificial intelligence that serves everyone and works for gender equality”.

Sharing his personal experience as an engineering teaching, he attested first-hand to the knowledge that young women and men are equally fascinated by and capable of tackling science, “brimming with ideas, and ready to carry our world forward”.

We must ensure that they have access to the same learning and work opportunities on a level playing field” so where women can realize their true potential, spelled out the Secretary-General.

They highlighted that women remain underrepresented among senior scientists in academia, are awarded less research funding than men, and are less likely to be promoted.

And in the private sector, they are less present in company leadership and technical roles in tech industries.

“The lack of equal opportunities in the workplace is driving women out of research professions”, the UN officials said, urging that “the principle of equality” be put into action so that “science works for women, because it works against them all too often”. 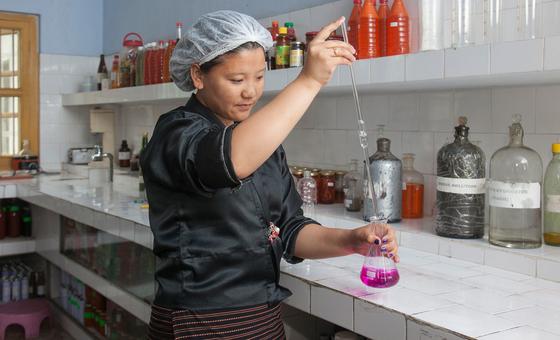 Working together across the public and private sectors and across generations can bring about positive change, such as by eliminating gender stereotypes in education and putting policies in place to attract and support women scientists in the workforce.

“We urgently need it to build more inclusive, transformative and accountable science and technology ecosystems that are free of biases and discrimination…to accelerate the Sustainable Development Goals, and address the challenges that impact us all”, they said.

In his message for the day, General Assembly President Abdulla Shahid, said he saw the COVID outbreak as demonstrating “the critical role of women scientists in various stages in the fight against the pandemic”.

He added that COVID-19 “can act as a catalyst for solutions that can foster greater inclusivity for women and girls in STEM”.